“A Manual of Style for Contract Drafting” Is the New Orthodoxy

This week I’ve had the distinct privilege of doing two back-to-back day-long “Drafting Clearer Contracts” seminars at De Brauw Blackstone Westbroek, the prominent Netherlands law firm. (I just wrapped up the second seminar.) In that regard, consider the following:

De Brauw’s very handsome auditorium seats one hundred (see the photo below), but demand for the seminars exceeded the space available. I had told De Brauw that they could invite clients, and they were astonished to receive over one hundred acceptances within 24 hours of sending out invitations. Ultimately, they invited over 60 client representatives on each of the two days, but still that wasn’t enough to meet the demand. 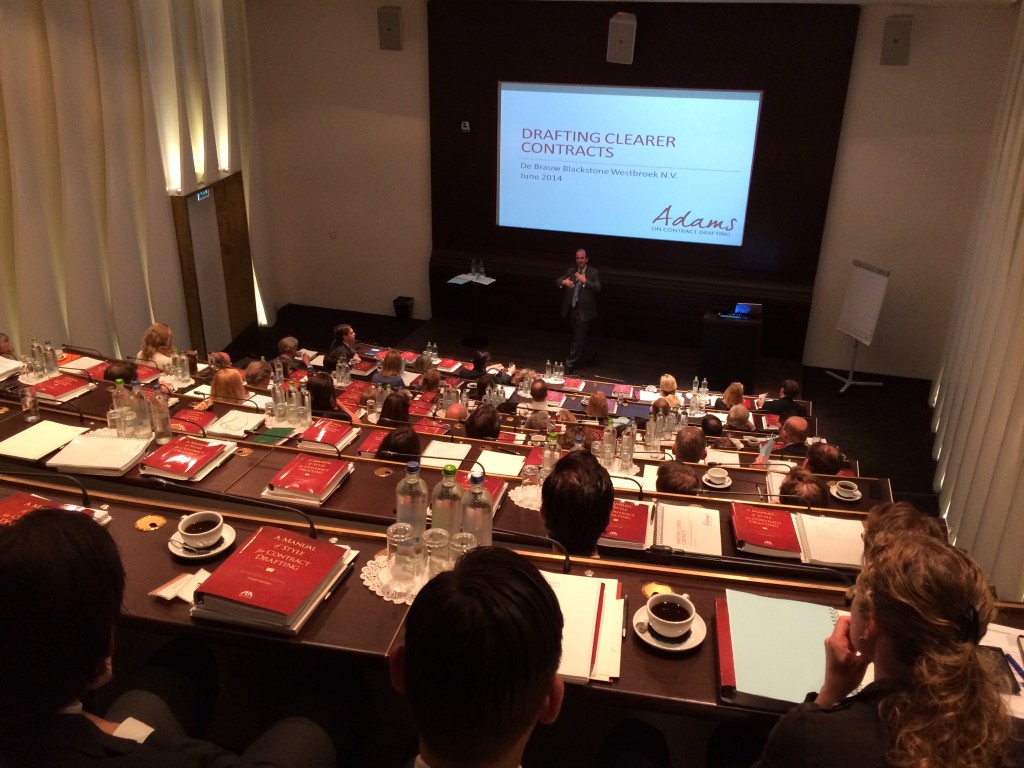 And in connection with the seminars, De Brauw purchased—count ’em—220 copies of the book. That’s a lot of books.

Why go into this detail? Not as an exercise in self-congratulation, as unlikely as that might seem. Instead, this interest in what I have to say and, by extension, in the book suggests to me that it might be time to be a little less timid about how traditionalists might react to a draft that complies with MSCD guidelines. Instead of wringing one’s hands and preparing to cave, perhaps it’s time to be a bit assertive, in that MSCD appears to be on its way to becoming the new orthodoxy.

Of course, your best bet is to get your retaliation in first, as described in this post and this post. But if that doesn’t work, it might be time to say a gentler version of the following: “We’re happy to consider the changes you propose that pertain to the deal. But we can’t help but notice that in addition, you’re suggesting that instead of our following the guidelines contained in a book that has been accepted internationally by leading legal organizations as an authoritative reference work—A Manual of Style for Contract Drafting—you want us to make a bunch of unhelpful changes that have no bearing on the deal. Furthermore, those requested changes would require us to insert usages that, as detailed in MSCD, have nothing going for them other than misbegotten conventional wisdom. We have no interest in wasting our time and money, and yours, on such a pointless project. Please reconsider.”

On the subject of De Brauw, I think that their reasons for bringing me in to do the seminars make complete sense. They’re embarking on a program of contract automation, and as part of that they want to put their drafting in order. So they have a team dedicated to preparing a style guide, something that I’ve long said is a first step toward a rational contract process. They think that having me give my seminars will help set the tone for this initiative. And because De Brauw think that it would be best if they and their clients agree on what optimal contract language looks like, they wanted to have client representatives attend the seminar.

I look forward to keeping track of De Brauw’s progress.