Another Conversation with Mark Anderson 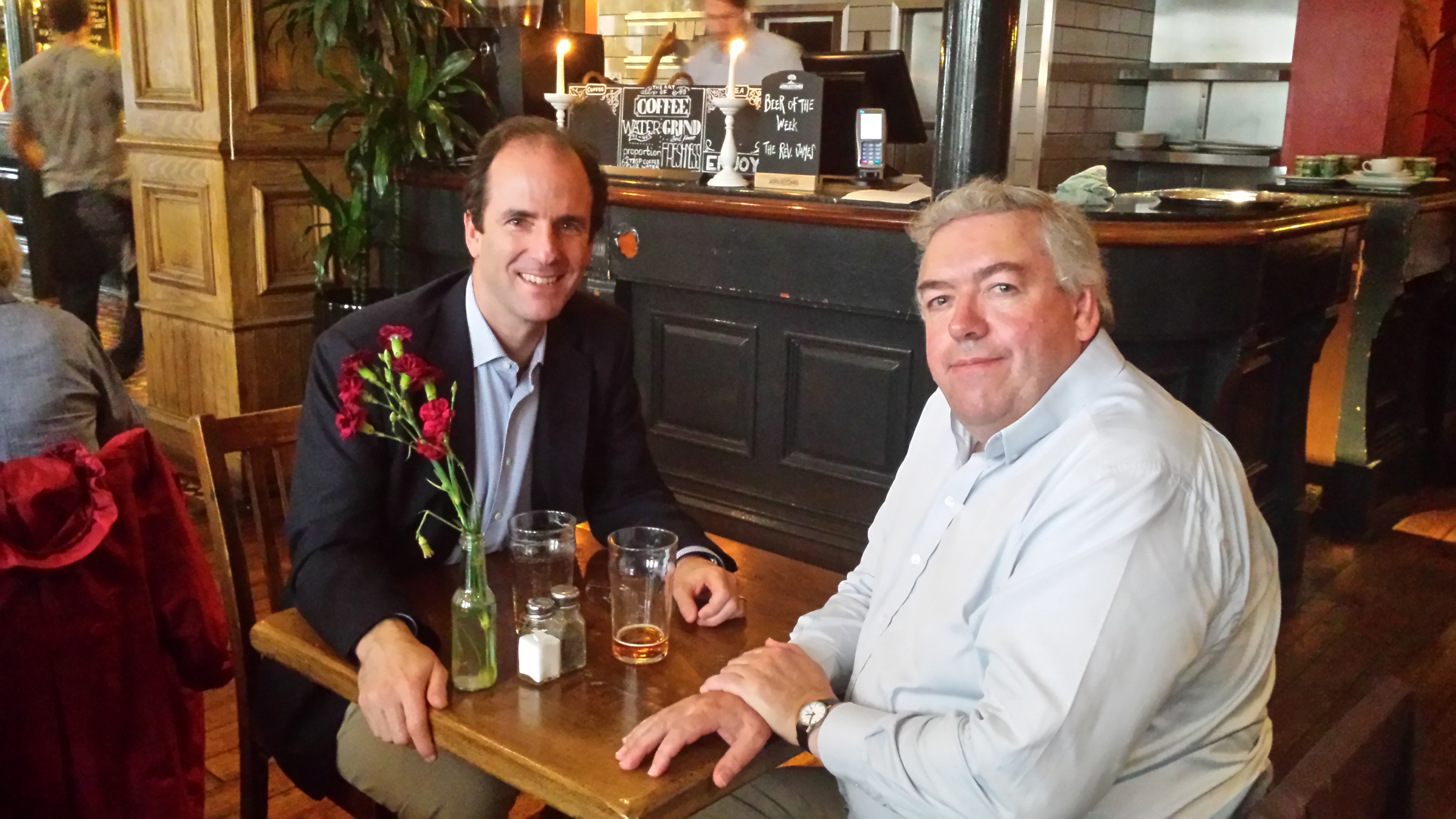 Ken: I’m here with Mark Anderson, an English lawyer who specializes in IP transactions. He’s also a blogger and the co-author or editor of too many books related to contracts. I’ve mentioned him plenty on my blog, and we’ve done some interesting stuff together—just search for his name on my blog.

Mark: I see you exhumed that photo from 2014. The carnations were a nice touch—you shouldn’t have!

Ken: I wish we were now having a pint together somewhere, but of course we’re each hunkered down at home. So, why are we talking? Because around a week ago my blog was a scene of high drama, in that after some handwringing I published a post that took issue with one of your recent posts.

Ken: I then heard from two readers who were a little sad that mommy and daddy were fighting. (Shout out to @luis_in_brief and @kemitchell—’sup guys!) So later that day, after some more fretting, I took the post down.

Ken: Of course, being a phlegmatic Englishman, you didn’t give a rat’s ass. But I thought it worth having this chat, for two reasons. First, this contretemps has something to say about the nature of social-media relationship. And second, it has reminded me how different we are and how we see our roles differently.

Mark: A rat’s ass? Is that like a tinker’s cuss? I’ll grant you that the online life is artificial.  People react in different ways to what they read. My approach is be robust with the ideas, and gentle on the people, but I forget sometimes that others interpret comments differently.

Ken: In our case, as I recall it you took issue with my notion of “contract-drafting specialists” (expressed in this post). You suggested that plenty of people serve that function; I thought you misunderstood what I do. A couple of years later we had an exchange about U.S. versus English drafting (discussed in this 2019 post) that left me even more convinced we had very different views of what constitutes effective drafting. So I had long been spoiling for a fight—albeit a nerdy and measured one—and your recent post gave me an excuse to express those concerns.

Mark: Yes, perceived slights and erratic communication aren’t a promising combination. That’s why we’re talking now. But we’re not saying that it was all a misunderstanding and that we in fact see eye to eye. It’s more that we recognize that we’re different people with different responsibilities, so it’s unsurprising that we have different takes.

Ken: You have your own law firm, with around 16 people. That’s a big responsibility. And you help people get deals done. So your driving force is expediency—you work with the world as it is. That’s consistent with your affable nature.

Mark: Whereas you’re above the fray, so your focus is not on what is, but what should be. You hate disorder and miscommunication—you have a sense of mission, which has been essential to achieving what you have with MSCD and your teaching. So, you’re not averse to rapping people’s knuckles if they get things wrong.

Ken: We have different tasks that reflect our different temperaments. But I have the easier task—just identifying what’s best. By contrast, you have to compromise if you want to get anything done in a copy-and-paste world. But sometimes you might underestimate the extent of the dysfunction. For example, in your 2019 post (the one I link to above) you say, “Resistance to modern drafting has now all but evaporated among English business lawyers.” That doesn’t reflect the world that I see. On the other hand, you periodically perform a brutal autopsy on the usual crud. For example, there’s this recent post about the standard Premier League employment contract. Will the real Mark Anderson please stand up!

Mark: I am a big fan of your work. But, as you say, we have different jobs, different temperaments, and different ways of expressing ideas. I care about contract drafting, but I also care about negotiating deals, advising on how a court would interpret a contract, working with clients and counterparties, helping to run a law firm, training juniors, and so on. I try to do all these things the best I can, but I am never going to achieve your level of focus on contract drafting.

Ken: I pay exquisite attention to how courts interpret contract language. I don’t champion clarity over outcomes—being clearer reduces risk. That said, if a court says you have to say something a certain way, that’s what you do. Beyond that, I don’t feel compelled to slavishly copy “tested” contract language. But to return to what prompted this exchange, two things come to mind. First, if you feel aggravated with someone who has shown themselves to be a friend, speak with them about it! And second, I’m coming to recognize that change won’t come from telling people they’re wrong but from creating compelling alternatives to dysfunction.

Mark: As a friend, I have wanted you to recognize that for years. I think people will change more if they are encouraged and shown a better way, rather than having their knuckles rapped.

Ken: I’ll explain myself more clearly. When I tell the world that a given analysis is flawed, I’m performing a public service. That’s what the marketplace of ideas is for—as you’ve already said, “be robust with the ideas.” I do that sort of thing with gusto. By contrast, when it comes to people just trying to get work done, I never rap knuckles (although I permit myself to laugh at stuff). My point is a more general one. With MSCD, I offer readers an alternative to the prevailing dysfunction. It offers a route to becoming a better-informed consumer of contract language. But most people won’t have the time or inclination to rebuild their contracts along MSCD lines. That’s why I want to offer an alternative, a way to clear the decks—an automated library of contract templates combined with an MSCD-based training ecosystem. A guy can dream ….

Mark: A great dream, and one that I am confident you will achieve!

Ken: Thank you for this chat, Mark.