Apparently Some of You Don’t Always Agree with Me 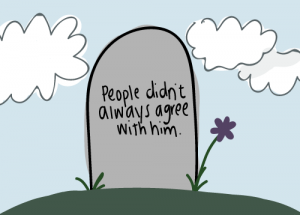 Recently a handful  of people have in passing expressed to me the same sentiment: they don’t always agree with me.

Given how often I hear this, I’ve long thought that my epitaph should be, “People didn’t always agree with him.”

It seems pointless simply to tell me that you don’t always agree with me. What am I supposed to make of that? If it were the opening salvo of a discussion in which we explore the nature of any disagreement, that could be worthwhile, but it’s rarely what happens.

I see three possible explanations for someone saying they don’t always agree with me. First, sometimes what they mean is that they’re not in a position to adopt an approach I recommend. Of course: I always stress that whether you’re able make a given change depends on the context.

Second, sometimes it seems as if the speaker just wants to make it clear, perhaps to themselves as much as to me, that their views on such matters carry as much weight as mine.

And third, they might in fact have one or more specific issues in mind but they haven’t gotten around to telling me.

If for whatever reason you have the urge to tell me that you don’t always agree with me and you leave it at that, you can expect me to shrug and move on. But if you follow up by explaining what’s on your mind, and it’s clear that you’re familiar with my views, you’ll have my full attention. There’s nothing I like better than having someone show me I’m wrong.

[Thank you to my daughter Sydney for the illustration.]