Contract Creation Is the Stepchild of the Contracts Process 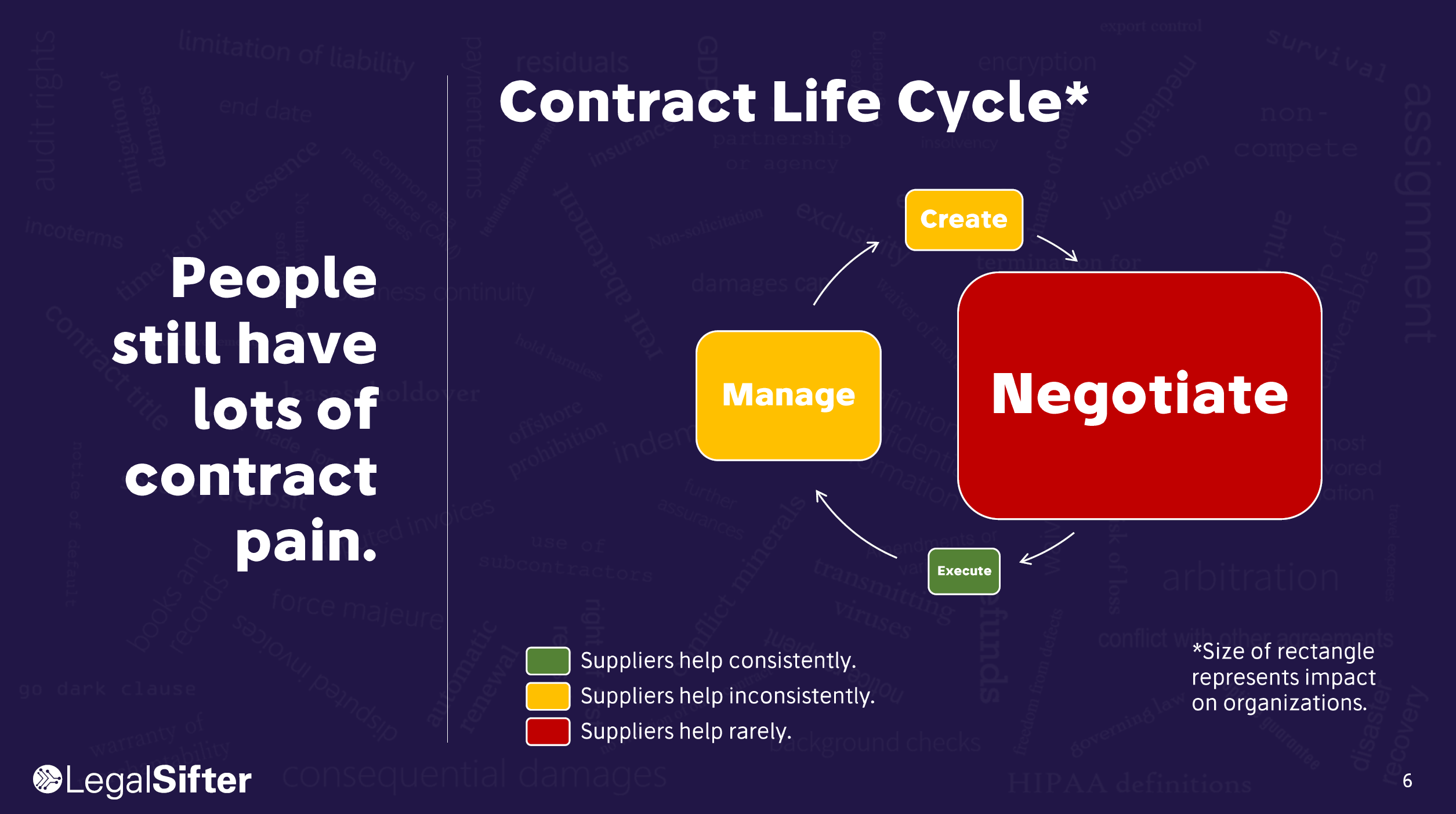 The legal profession has a love-hate relationship with technology. On the one hand, lawyers are, uh, challenged when it comes to using basic technology. And technology vendors tend to grouse that selling to lawyers is a hassle.

That brings us to the image at the top of this post. It’s from a PowerPoint presentation by Kevin Miller, CEO of LegalSifter, the artificial-intelligence company that helps with contracts before and after you sign. (I’ve been an advisor to LegalSifter for the past two years.)

On this slide, the size of the rectangles representing the four stages in the contracts process indicates the impact each of those stages has on an organization. In other words, how much pain is associated with each stage. The largest rectangle is the one for negotiation. The next largest is management, following by creation, with signing being the smallest.

Signing contracts is the most mature stage when it comes to applying technology to the contracts process. By contrast, the slide suggests that suppliers rarely help with negotiation, but that’s changing now that artificial intelligence is going mainstream—the slide should perhaps now be yellow, not red.

There’s something of a gold rush of AI vendors looking to serve the contracts process. (Over the past year I must have sent Kevin links to a couple of dozen items describing a hopeful new competitor.) Some of those vendors are looking to help with management. That’s largely a matter of extracting information from contracts you’ve already signed. But others are looking to help with negotiation, by making it easier for you to review draft contracts. (LegalSifter helps with both tasks.)

First, the color of the “Create” rectangle should be red, not yellow. Compared with AI bees buzzing around contract-negotiation and contract-management flowers, contract creation is a relative backwater. That’s because contract creation is primarily about creating content—an expensive, old-fashioned proposition. Technology plays an essential part, and technologies such a docassemble have been getting a fair amount of attention. But the technology plays a supporting role, and it isn’t as glam as AI.

And second, the rectangle for “Create” should really be as large as any of the other three rectangles. In terms of the process, contract creation is usually a relatively simple matter. At the most basic level, anyone can use a Word template to bang out a confidentiality agreement. But things get more complicated when you think in terms of contract content.

For one thing, creating new templates is a process that comes with all sorts of pain. Knowing how to do a particular kind of deal doesn’t mean you know how to express the deal effectively in a contract, so creating new templates often involves drafting by committee, with people of uncertain expertise dickering for months over whose pet wording will appear in a template.

And if, as is the case at most organizations, your templates end up being dysfunctional in terms of what they say and how they say it, that dysfunction creates pain in negotiating and managing your contracts—it increases the size of the rectangles for those parts of the process.

It stands to reason that the most important aspect of a contract is what the thing says. Everything flows from that. So it’s endlessly frustrating for me that creating contract content still handled as an artisanal task, with technology—particularly AI applied to other parts of the contracts process—garnering all the attention.

Technology ushers contract content through the stages in the contracts process. If that content is dysfunctional, the outcome will be suboptimal, no matter how gee-whiz the technology. So self-interest would have the legal profession devoting to contract content some of the money being thrown at technology.

In particular, improving contract content requires offering an alternative to copy-and-pasting from precedent contracts of questionable quality and relevant. Doing that effectively would require building an automated library of customizable and annotated commercial contracts. In the coming months, some of you might find me knocking on your doors, inviting your organization to support such an initiative.

Since this post was prompted by a LegalSifter slide: If you find value in what I do and if your organization has more contracts to review than it can comfortably handle, check out what LegalSifter has to offer. Click here to send an email to Eben Adams, LegalSifter’s Vice President, Growth & Partnerships (no relation!). Tell him Ken sent you!