Contract Drafting in South Korea: My Q&A with Jungwoo Chang 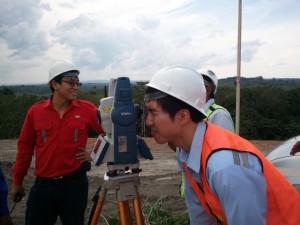 I’m particularly looking forward to my visit to Seoul, as it will be my first visit. I thought it appropriate to get a sense beforehand of what the contract-drafting life is like for Korean lawyers. So I reached out to Jungwoo Chang, who subscribes to my blog email updates. Below is my interview with him. And that’s him in the photo above, which makes a change from the usual lawyer headshot. Spoiler alert: working with contracts in Korea is pretty much like working with contracts everywhere else!

Q: Tell my readers about yourself.

A: My name is Jungwoo Chang, I’m Korean, and I live in Seoul. I’m an attorney working as in-house counsel at LG International Corp., a natural-resources development and trading company that’s part of LG group. I’m a Korean-qualified lawyer—I was a part of Korea’s first graduating law school class, in 2012. (Korea recently adopted the U.S. system of law school education, with law being studied at the graduate-school level.) At LG, I specialize in natural resources, in particular Indonesian mining law. That’s why I’ve spent almost half my time in Indonesia since I’ve been at LG. 만나서 반갑습니다! Saya senang sekali bertemu dengan Anda! (It is a pleasure to meet you!)

Q: How did you learn English?

A: In Korea, English is a mandatory course in middle and high school because it’s one of the tested subjects for applying to university, like the SATs. Also, I lived in the U.S for a while when I was a boy, and I served my military duty with the U.S. forces in Korea; these experiences helped me to learn and improve my English. But I learned “law” English by working at LG, and A Manual of Style for Contract Drafting was a great help for me, as someone who isn’t a native English speaker and who hasn’t been educated in the U.S. or a Commonwealth country.

Q: To what extent do you work with contracts in English? And when you do, are you generally the drafter or the reviewer, or does it vary from transaction to transaction?

A: I handle some Korean court litigation , as well as contracts between Korean parties in Korean. But more than half of my job consists of working with English-language contracts between LG and parties from Indonesia or some other South-east Asian country. In standard transactions such as purchase agreements or nondisclosure agreements, I usually review drafts prepared by business people using the many templates they have available. But with my work developing LG’s Indonesian mine site, sometimes suitable templates aren’t available, so I have to draft from scratch. So my role varies and depends on the types of transaction and whether our business people have experience in those kinds of transactions.

Q: How important are English-language contracts for Korean companies?

Q: What are some challenges facing Korean lawyers working with contracts in English contracts?

A: Most of all, it’s difficult to catch the subtle nuance of English words, especially ambiguity. And in this context, any lawyers, not only for Korean lawyers, who prefer plain English—or Standard English, to use your preferred term—will face daily the challenge of having to deal with archaisms, redundancies, and the other problems of traditional language. I know I do. I also encounter nonlawyers who still insist on using archaic words, such as WHEAREAS or WITNESSETH. Sometimes they cling to their stereotype of what a contract looks like even more fiercely than do attorneys!

Q: Is there anything that you’d like to see changed, in terms of training, resources, or work practices?

A: Getting rid of archaism and redundancies. It’s frustrating when I receive a draft from a law firm, even one of the biggest in the world, and it contains a lot of archaism and redundancies that are irrelevant to the deal and add no new information. Some clients might prefer a very long contract and judge the quality of the contract by the number of pages, but not me.

Q: What do you like about working with contracts?

A: I like the sense of achievement when the parties sign a contract, especially if I participated in negotiations from the start. A contract is a record of all the give-and-take between the parties. Also, I’m proud when I’m given the opportunity to draft a contract for a deal that might be a milestone for our company. I just closed a deal involving a twenty-year contract with an Indonesian company. It took almost a year to reach agreement, and when we were done, I and my colleagues from the business team celebrated with a night on the town.

Q: Does the fact that South Korea has a civil-law system affect contract drafting?

A: Even though contract are governed by civil law in Korean, in my experience, business people prefer common-law style drafting: by in effect incorporating in the contract elements of the civil code, common-law style drafting makes contracts easier to understand if you’re unfamiliar with the civil code. And if that’s what my clients like, I have to take that into account. And I haven’t yet had any difficulty in reviewing or drafting common-law contracts, maybe because in Korea, cases and precedents play an important role. I agree with the notion that nowadays common-law and civil-law contracts increasingly resemble each other.

Q: And a final question: Next month’s trip to Seoul will be my first. What’s one thing that I should do while I’m there?

A: If you are foodie, I recommend that you try traditional Korean foods. If you’re not a vegetarian, my best recommendation is that you try Samgyeopsal Gui (grilled pork belly; for more information go http://en.wikipedia.org/wiki/Samgyeopsal) and Soju, a popular alcoholic drink in Korea. I will recommend some decent places if you don’t mind.

Q: Thank you, Jungwoo, for taking the time to do this interview.

A: It’s been my pleasure.