Jurisdiction Provisions, Part 3: Don’t Use the Words “Jurisdiction” and “Venue” in Specifying Which Courts Would Resolve Disputes 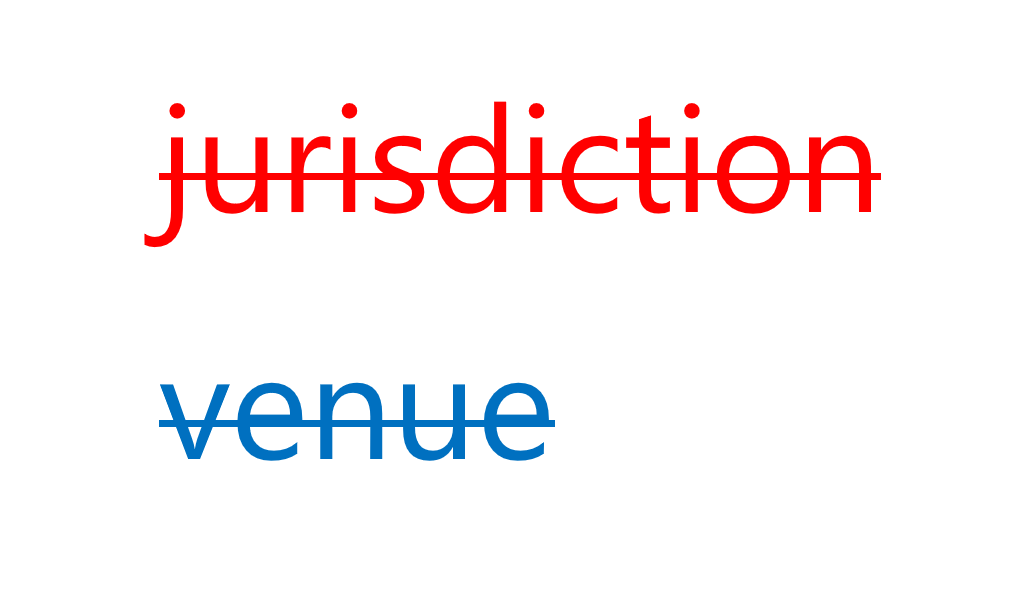 As you will have noticed from this blog post and this blog post, I’ve been contemplating contract provisions that seek to specify which courts would resolve disputes between the parties. In the process, I’ve observed that people appear uncertain about how concepts of venue and jurisdiction relate to this issue.

Some provisions use just jurisdiction:

Each party hereby submits to the jurisdiction of those courts for purposes of any such proceeding.

Others use just venue:

The parties agree that exclusive venue for any litigation, action or proceeding arising from or relating to this Policy Agreement shall lie in the state or federal courts located in New York County, New York and each of the parties expressly waives any right to contest such venue for any reason whatsoever.

And some use both venue and jurisdiction:

Sole and exclusive jurisdiction and venue for any action, suit or litigation arising from or related to this agreement shall be in the state or federal courts located in the State of New Hampshire.

You might recall John Coyle—I spoke with him in this podcast, and I’ve discussed his work in the first of the posts I link to above, and also in this post. It’s thanks to his work that I’ve been able to revisit jurisdiction provisions. But my advice to you is very different from the advice he offers in his article with Professor Drahozal: I recommend you use neither the word jurisdiction nor the word venue in provisions establishing where disputes are brought.

Jurisdiction and venue are jurisprudence terms of art. (I’ve placed below, so as not to clog up the works, a summary of what those terms mean.) A key principle of effective contract drafting—one addressed in my 2017 article with Vice Chancellor Laster of the Delaware Chancery Court (here)—is that you leave jurisprudence to the courts. You can’t rely on courts deferring to contracts that attempt to attribute to a given transaction a jurisprudential label that courts apply only if the circumstances justify it.

More specifically, a contract might say that jurisdiction or venue, or both, have been established, but that doesn’t mean a court has to accept that.

You could conceivably attempt to state in a contract your basis for claiming that jurisdiction or venue have been established, but to do that you’d in effect have to outline what you’d say in a court pleading addressing the issue. That’s a wildly an unrealistic notion. For one thing, those working on a deal probably wouldn’t want to devote time and money to laying the foundation for where they’d litigate! And in my experience, few people working with contracts have more than a rudimentary understanding of what determines where you can bring a dispute, and the erratic use of terminology on display in contracts suggests as much.

So instead of using the word jurisdiction or the word venue, say something like this (it happens to provide for exclusive jurisdiction):

I’ve used this kind of provision for years. It’s hardly revolutionary. For example, it’s comparable to that recommended in Negotiating and Drafting Contract Boilerplate 143 (Tina L. Stark ed. 2003), which doesn’t use jurisdiction or venue either. Would this kind of provision establish jurisdiction? Would it establish venue? Normally, yes, but it could be challenged, depending on the circumstances. That will always be the case. Throwing jurisprudence terms of art into the mix doesn’t help. In fact, it just bamboozles drafters and readers.

Isn’t it paradoxical that I use the phrase jurisdiction provision in the title of this post even though I recommend not using the word jurisdiction in provisions that specify which courts would resolve disputes between the parties? Not really. Labels have to be convenient; the provision itself has to reflect awkward reality.

What I recommend in this post is consistent with the approach reflected in A Manual of Style for Contract. For example, it’s analogous to my recommending that you not use indemnify and hold harmless. And that you not use represents and warrants.

A hallmark of traditional contract drafting is clinging to legalisms like a shipwrecked sailor clinging to the wreckage. I opt instead to say clearly and simply whatever is required to address a given issue.

But as always, I’m happy to have y’all show me anything I’ve missed.

Background: Some Basics of Jurisdiction and Venue

“‘Venue’ refers to locality, the place within the relevant judicial system where a lawsuit should be heard according to the applicable statutes or rules.” Charles Alan Wright & Arthur P. Miller, Federal Practice and Procedure § 3801 (Helen Hershkoff ed., 4th ed. 2015) (“Wright & Miller). That treatise goes on to say “Sometimes venue is confused with subject matter jurisdiction. This ought not happen, because the two concepts are quite different.” It quotes the U.S. Supreme Court:

The jurisdiction of the federal courts—their power to adjudicate—is a grant of authority to them by Congress and thus beyond the scope of litigants to confer. But the locality of a law suit—the place where judicial authority may be exercised—though defined by legislation, relates to the convenience of litigants and as such is subject to their disposition. This basic difference between the court’s power and the litigant’s convenience is historic in the federal courts.

To state it another way, subject matter jurisdiction addresses whether a dispute may be heard by a federal court at all. If so, venue then determines which federal court—usually meaning which federal district—should hear the case. The federal trial courts are divided geographically into districts, and the venue statutes prescribe appropriate districts for each case.

But there’s another relevant distinction, that between personal jurisdiction and venue. Again, Wright & Miller (footnotes omitted):

The defense of improper venue is a personal privilege of the defendant, who may waive it either expressly or by failing to make timely objection. In this respect venue is similar to personal jurisdiction, which also is waivable. …

Personal jurisdiction and venue, though separate concepts, share some traits other than waivability. Both are concerned with the territorial reach of the court, and not with its inherent adjudicative power. Both depend on statutory factors but incorporate equitable and prudential considerations. Most courts of appeal assess lower court venue determinations by the same standard as personal jurisdiction determinations, reviewing them de novo and accepting any factual findings unless clearly erroneous.

The fourth and final installment on jurisdiction provisions—my take on the inconvenient-forum thing.