[Warning: I made this first bit up just to accommodate my fish-gutting analogy. Why that analogy? Because it came to mind so I went with it!] Last month I was isolating in Alaska with my lacrosse buddies, Declan Smartwood, Jr. and Shackleford Stanwick, Sr. We spent our time salmon fishing. I’m not a fan of killing fish, but Dec and Shack had no qualms, so we found ourselves with a bunch of dead salmon to deal with. I expressed to Dec and Shack that I’m not partial to gutting fish either. They were obviously wondering how they had come to be in the company someone so prissy. But Shack also had a more specific issue on his mind.

“You don’t refer to ‘gutting’ a salmon,” said Shack. “There’s a more precise term, depending on the fish. With salmon, you refer to ‘salmonizing’ a salmon. If it’s a cod, you ‘coddle’ it. If it’s a pollock, you ‘pollockate’ it.”

“Shack,” I said, “That’s the dumbest thing I’ve ever heard. I’m outta here.” With that, I jumped in my kayak and headed up the Kenai river. But that’s another story.

Amazingly enough, that anecdote is relevant to how we use the contract terms of art indemnify and indemnification.

In particular, in discussing the phrase indemnify and hold harmless, I’ve long said it’s hold harmless that needs to go. See for example this 2009 blog post. Indemnify is a term of art, and there’s always a simpler way of expressing the meaning of a term of art—instead of saying Acme shall indemnify Widgetco for X, you could say Acme will be liable to Widgetco for X. But because indemnify has a generally accepted meaning and doesn’t cause serious trouble, I’ve been OK sticking with it, as we have bigger problems to deal with.

Two months ago I recommended in this post not using the related term of art indemnity. That caused Kyle Mitchell and Chris Lemens to post comments suggesting it was time for me to rethink indemnify and indemnification.

That’s where my Shack anecdote comes in. It would be pointless to have a different term for gutting fish, depending on the fish you’re gutting—the process is the same, regardless of the kind of fish. And when you’re holding a salmon, you don’t have to be reminded that it’s a salmon you’re holding. Similarly, indemnification involves assuming, and paying for, liability. If you’re specific about what that liability consists of, you don’t have to use the verb indemnify—it’s implicit in how the provision operates that the result is indemnification.

So my indemnification language could say will be liable to those Acme Indemnitees for instead of shall indemnify those Acme Indemnitees against without there being a rational basis for claiming that it offers less protection. The benefit of making that change is that you’d eliminate the unnecessary term of art indemnify. Kyle and Chris would tell you that clients would appreciate it.

And it’s not just clients who might benefit. Consider what MSCD says: 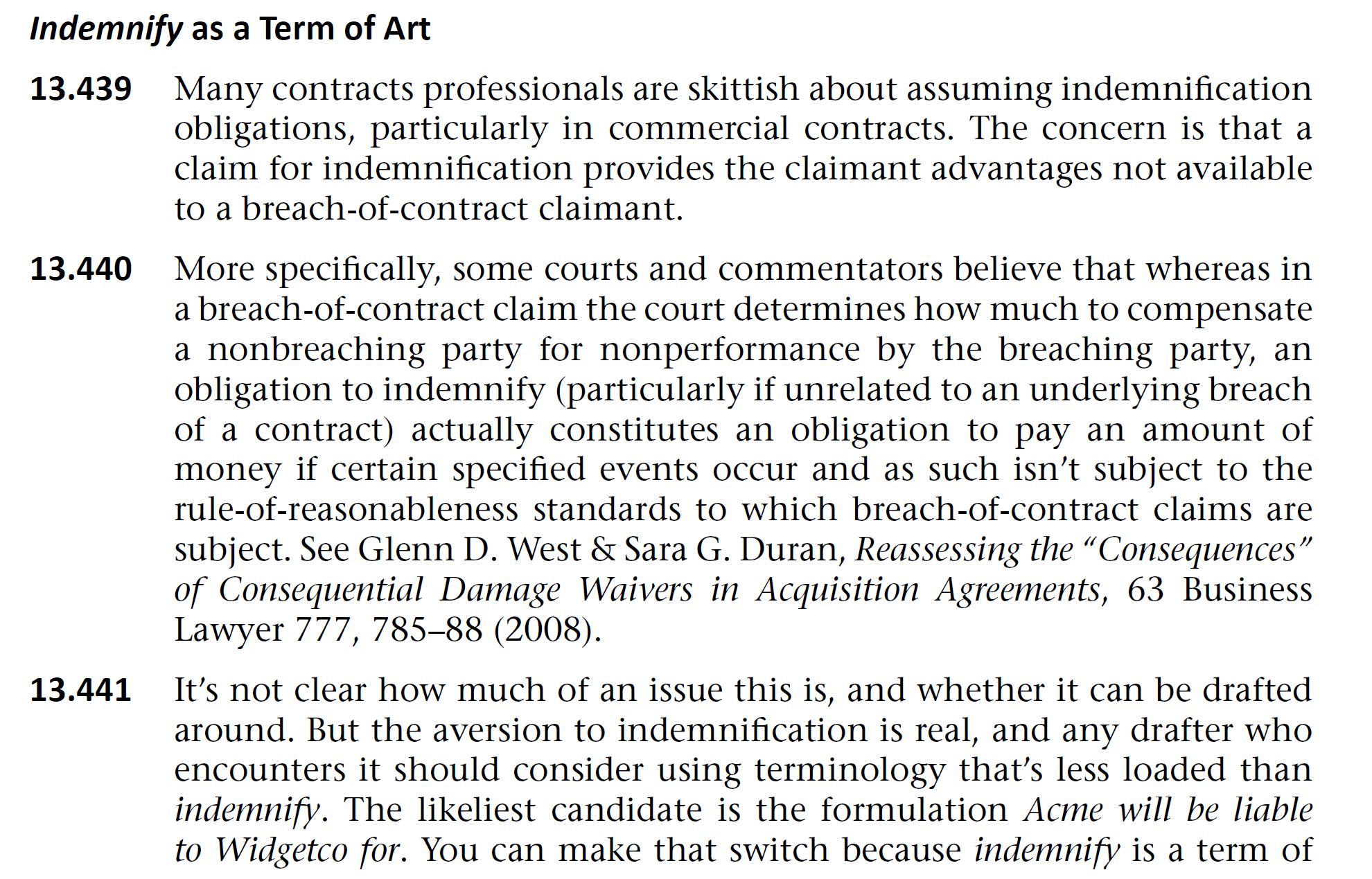 Getting rid of indemnify might well freak out traditionalists, but in his comment, Chris suggests a compromise approach—ditch indemnify but use Indemnification as a heading. I’ve used that approach elsewhere. For example, I’m fine with using Warranty as a heading, but I don’t use the verb warrant to express what might constitute warranties as a matter of law. For more on that, see MSCD or this ancient blog post.

I still don’t fee a burning need to get rid of indemnify right now, but I do think it’s appropriate to start talking about doing so.