[Updated 1:40 a.m. 21 February 2020 to expand the analysis to address additional text in the screenshot Warren tweeted.]

This NDA exhibits the standard dysfunction of traditional contract drafting, in terms of what it says, how it says it, and its layout. I'm shocked! Not. https://t.co/hO4bht3qyl

I have no interest in critiquing this sort of generic stuff. Life’s too short.

But this evening, during a CNN “town hall,” Elizabeth Warren brandished a “release and covenant not to sue” that she herself had written, seeing, as she says, that she used to teach contract law. The idea is that if Bloomberg signs it, it would have the effect of allowing anyone who had signed a confidentiality with Bloomberg or his campaign to speak freely. She read out the relevant language. This tweet contains the relevant clip:

Upon walking on stage at #CNNTownHall, @ewarren ups pressure on Bloomberg, provides a sample contract for him to sign to release all the women & men held under NDAs.

She pulls no punches & is the fighter we need as prez. Donate to make that a reality: https://t.co/u2s3r9Gth8 pic.twitter.com/9bAGlpfqt8 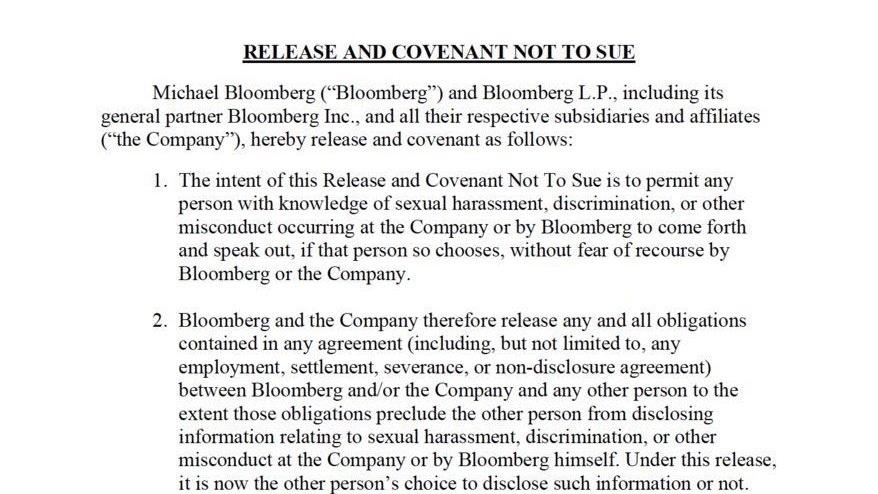 Seeing as I analyze contract language for a living (go here for more about me), I thought would be interesting to look at Warren’s proposed language, with the real draw being that she apparently wrote it herself. Here are my thoughts, such as they are:

So there’s room for improvement, which isn’t surprising: teaching contract law has little to do with effective contract drafting. But taking into account that traditional contract drafting is profoundly dysfunctional, this draft is OK. To have addressed the points I make above, it would have had to have been written by a contract-drafting specialist, and there aren’t many of us. And it looks really good compared with the dumpster fire that is Trump’s contract with Stormy Daniels (go here for my analysis of that).

Can you think of any substantive issues raised by this proposed language? I can think of two. First, given that I’d want the defined term the Company to refer just to Bloomberg L.P., I’d want to have the release also signed by any other Bloomberg entities that signed contracts prohibiting disclosure, and I’d want to include a statement of fact that no other Bloomberg entities signed any such contracts. And I’d say that all counterparties to contracts falling within the scope of the release are third-party beneficiaries to the release.