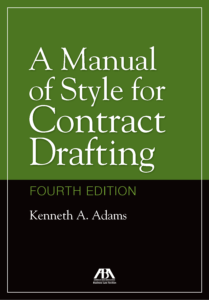 We’ve changed the binding for the fourth edition of A Manual of Style for Contract Drafting.

This might seem a trivial matter, but the binding was enough of an issue for me to ask readers about it in this 2008 post, and in 2014 I did this post about Amazon reviews objecting to the binding.

And not any old hardback binding—we’re using casewrap binding. The cover artwork is incorporated into the binding, so there’s no annoying dust jacket.