Notes from the Road: Australia 2014

I’m back in Kuala Lumpur, for a seminar starting tomorrow. I came here from Sydney; let me tell you about my time in Australia.

First, the seminars. Before my initial trip to Australia, the idea of an American coming to Australia to talk about contract drafting was greeted with a measure of polite befuddlement, so I’m pleased that with each visit—this was the third—a greater number of people have attended the seminars. And this year is the first time I’ve done one in Canberra.

Because the Australian legal profession has made greater progress towards “plain language” drafting than pretty much anywhere else, my seminars in Australia are something of a masterclass—I’m able to drop discussion of the more obvious inanities. It was always possible that those who attend my Australia seminars might nevertheless find what I have to say entirely self-evident, but that hasn’t been the case. There’s certainly been plenty of stuff to discuss. (In this 2012 blog post I mention some aspects of Australian drafting.) This time around, the feedback was particularly positive. It might be that the more sophisticated the audience, the more they appreciate the benefits of what I have to offer.

I was able to fit in some socializing. There was dinner at the home of Andrew Godwin, of Melbourne Law School. (Go here for my 2012 Q&A with Andrew.) My thanks again to Andrew and to Kelly McDermott of MLS for arranging this trip, for ensuring that it went smoothly, and for helping to make it such fun. 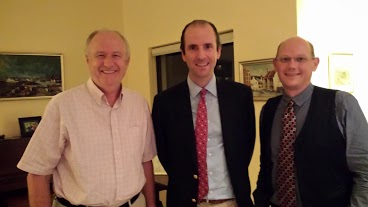 And I was delighted that on the eve of my departure from Australia I got to have dinner again at the home of Peter Butt, the Australian commentator on legal drafting. (I mention Peter in this post.) Also present were Neil James and Peta Spear of the Plain English Foundation, a company that offers plain-language training and editing to an enviable roster of clients. In the photo above, Peter is to the left, Neil to the right. (The less said about the leering, haggard guy in the middle, the better!) My thanks to Peter and his wife for their hospitality.

Almost inevitably, one topic at the nerdier end of the conversation at that dinner was shall.

I made the same point I’ve made in my Australia seminars: I use shall to impose an obligation on the subject of the sentence (if it’s a party). I don’t do that out of inertia or lack of imagination. Instead, I use shall in that manner because it gives me an extra verb structure to work with, leaving must and will free to use with other categories of contract language. I want to avoid the problem that has always afflicted shall—use of one verb structure for more than one category of contract language. (I wouldn’t recommend this use of shall in any other kind of writing.)

Everywhere except Australia, my approach is not only rigorous but also expedient. Because drafters in those other jurisdictions tend to overuse shall, advocating disciplined use of shall helps make my categories-of-contract-language framework palatable. I got a sense of that at a recent conference: I happened to be sitting behind  a group of knowledge-management people from Canadian law firms, and the first thing one of them said to me, after “Hello,” was “Thank you for making it safe to use shall!”

Because those who recommend dispensing with shall have made considerable progress in Australia, my recommendation is necessarily more awkward for purposes of Australian audiences. But I make it clear that I don’t expect those Australians who have dropped shall to immediately start using it again. Instead, I simply recommend that they consider that when it comes to expressing obligations, there’s no perfect answer, only various possible compromises, each with its costs and benefits. Giving an awkward word, shall, a greater role than it has in standard English is a price I’m willing to pay for making it easier to distinguish between the categories of contract language.

Anything to report other than the seminars, dinners, and shall? In no particular order: My first Airbnb experience, in a terraced house in Sydney. (A success.) Time spent wandering around the agreeably funky Sydney neighborhood of Darlinghurst. Observing fruit bats (not nocturnal) languidly roaming the skies and roosting in trees. Seeing a cockatoo flitting from one apartment building to another, squawking away. Enjoying at one of many Thai restaurants a lemongrass-infused bowl of tom yum soup.

So another round of Australia seminars has come and gone. I expect that you’ll see me there again next year. 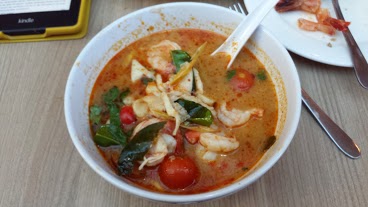