Notes from the Road: Back to London

I’ve just returned from from my third trip to London this year. The first was to speak at a conference; the second was to do an in-house seminar at one of the big English law firms; this time around, it was to do a public “Drafting Clearer Contracts” seminar for the Faculty of Laws of University College London. Here’s how this latest trip went.

After a day and a half of lurking in the faculty apartment that the UCL Faculty of Laws kindly made available to me, I met with the very genial Mark Anderson. Regular readers of this blog will be familiar with Mark, a prominent IP lawyer, managing parter of his law firm, blogger, Twitter presence, and prolific writer on contract stuff. Mark was largely responsible for my being invited to present this seminar. It was high time that we met in person.

We wandered to the British Museum, where Mark indulged me in my wish to revisit the Anglo-Saxon and Romano-British galleries. It was all reassuringly familiar to me—Sutton Hoo and so forth. (Someday I’ll let you in on my past life in medieval archaology.) 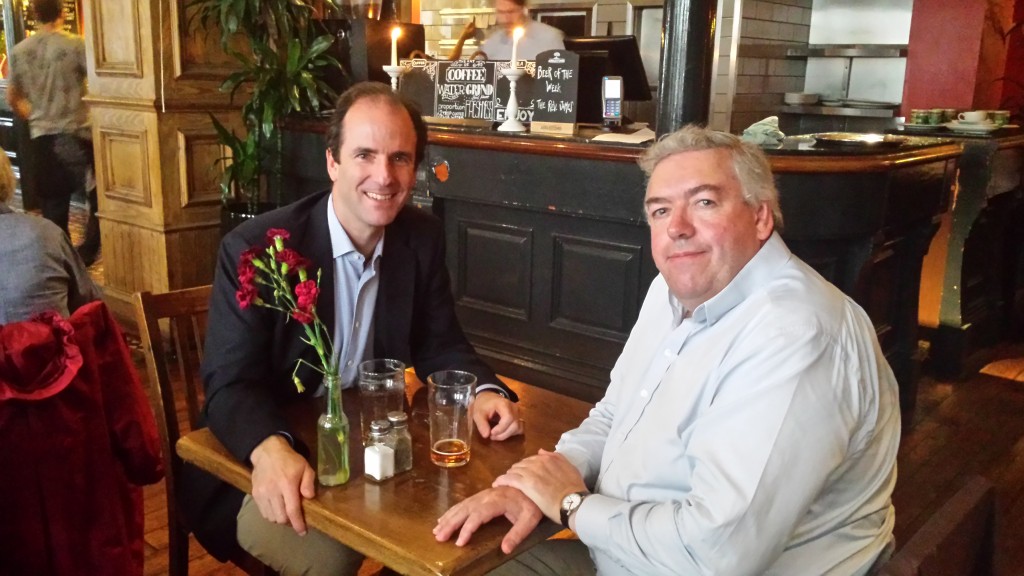 After a suitable lunch of roast beef and Yorkshire pudding, we retreated to the faculty apartment and kept nattering. The above photo was taken at our lunch; please ignore the guy with the leering, ravaged mug sitting across from Mark.

We had plenty to talk about. I’ll spare you the details, except that I was amused to have Mark gently inquire what sort of polishing I apply to the look of contracts that use the MSCD enumeration scheme. My answer was, None! That’s my scheme, and I’m sticking to it! I imagine Mark and reader Chris Lemens making common cause, tutting and shaking their heads.

This was the day of the seminar. The 37 participants were from assorted companies, law firms, and universities. Most were local, but I noticed that one person had traveled from Cheltenham, another from Oxford, and a third from Germany. It went off without a snag, except that three fat and resourceful flies had managed to make their way to the seminar room, in the lower level of the graduate building, and for a couple of hours they did their fly thing, annoying one and all.

How did those present respond to the seminar? Like participants at any of my public seminars, except that it all seemed a bit more novel to them. That shouldn’t come as a surprise: I’m less of a known quantity in England, and this was my first public seminar there.

Given that I haven’t pulled any punches in describing what I perceive to be shortcomings in the English approach to contract interpretation (see for example this recent article about best endeavours and its variants under English law), I had been a little nervous about how I’d be received in England. And I suspect that my ideas would ruffle some feathers at English law firms if I were to find myself on their turf. But during the seminar, discussion was unfailingly constructive and engaged: it’s unlikely that anyone would elect to spend a day in my company if they weren’t open to ways to improve contract language.

My thanks to the UCL Faculty of Laws for their hospitality. I hope to be back next year for another seminar, and I wouldn’t be surprised if other opportunities present themselves. Given that I lived in England in my teens and went to university there, it’s gratifying to be able to reconnect.

I ended the day, and my visit, by having dinner with three lawyers in private practice who have found my book worthwhile and whom I hadn’t met previously. That sort of connection helps make my globetrotting a pleasure.

4 thoughts on “Notes from the Road: Back to London”