Notes from the Road: Finland

I’ve just returned from a visit to Finland that combined work and play. On the one hand, I had a public “Drafting Clearer Contracts” seminar to do. On the other hand, I went with my wife Joanne; we were staying with my brother Charles, who happens to be the U.S. ambassador to Finland; and longtime family friends were in attendance too. 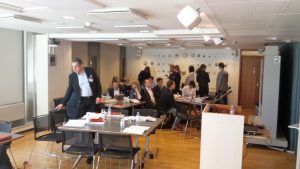 My seminar took place last Friday. In Europe, each public seminar I do requires a host, and in this case it was Roschier, the leading Nordic law firm. My thanks to them—the whole setup was impeccable. Photos of seminars aren’t particularly edifying, but for the heck of it, here’s a photo of the seminar room during a break.

And the participants were a congenial bunch—during breaks I had a chance to chat with them about Finland and the contract-drafting life. It appears they found the seminar worthwhile. According to a later email from one participant, “Your seminar was so far the most useful and most entertaining one I’ve attended.” 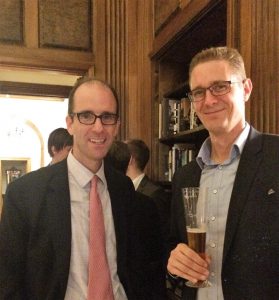 My brother organized a private reception in the ambassador’s residence for after the seminar, so a group of participants joined me in walking back to the U.S. Embassy. To the right is a photo of a cadaverous-looking gent with one of the participants. A good time was had by all. For one thing, the residence is a grand place to have a party. It’s beautifully appointed, with extensive flame-birch paneling and moulding that was recently restored—who knows why it was painted over in the first place. 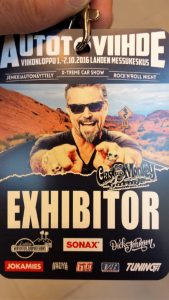 Joanne and I were able to stay for the weekend, so we tagged along with my brother as he headed an hour north of Helsinki to the city of Lahti, to make an appearance at the Lahti X-Treme Car Show, an annual gathering of fans of U.S. vintage cars and hot rods that attracts some 10,000 fans.

Why would the U.S. ambassador appear at a car show? It so happens that a member of the embassy staff is a car buff, so the embassy had a stand featuring his vintage Ford. (Charles is at the wheel in the photo below.) And Charles was a featured guest at the show. He appeared on stage with the other luminaries, Richard Rawlings, co-host of the Discovery show Fast N’ Loud, and Gene Winfield, veteran customizer. Charles’s main responsibility was to pick a car as “The Ambassador’s Choice.” He selected a Stingray entered by Finnish vocational school that trains students in car restoration, with all costs paid by a branch of Finnish government. (There’s a reason why the Finnish education system is so highly regarded.) 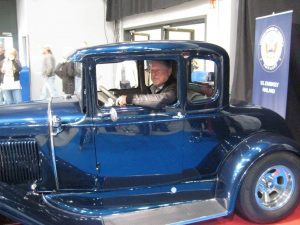 Meanwhile, the rest of the embassy contingent wandered around the exhibit halls, ogled the cars, were treated to lunch (cloudberry salad, reindeer soup, and apple cake for me), and sampled Finnish beer. It was all slightly surreal: Joanne and I had hardly been exposed to Finland, yet here we were in the thick of Finnish car subculture. It’s something Finns take seriously, as was evident in the commitment demonstrated by those in attendance at the car show. The United States has every reason to consider itself fortunate that it has such friends.

We spent Sunday in walks around the city, as well as a brief run. We were favored with a spectacular fall day. 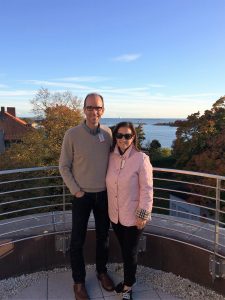 We ended the evening with pizza—my pizza. It was a challenge using random Finnish flour instead of my usual King Arthur’s flour, and an industrial convection oven instead of a regular oven with a baking stone. But no one went hungry.

Four days in Finland doesn’t qualify me to say anything about Finland, but I permit myself to observe that the Finns I met were unfailingly welcoming, thoughtful, and engaging. And Helsinki is a beautiful city. I hope I have the opportunity to visit again.