Notes from the Road: Hamburg 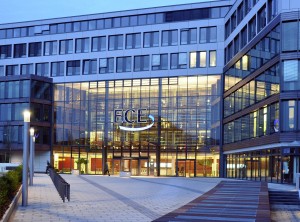 I’ve just left Hamburg after a three-day visit. Some thoughts:

I held public seminars on Monday and Tuesday at the offices of ECE Projektmanagement, the shopping-center developer. My host was the exceedingly gracious Joachim Kämpf, of ECE’s legal department. He’s a veteran of one of my 2012 Geneva seminars.

Last Sunday, Joachim gave me a walking tour of downtown Hamburg. As has often happened in my travels, I got the feeling that here was another part of the world that is demonstrating a level of civic spirit, energy, and imagination that should make anyone from the U.S. sit up and take notice.

Joachim also treated me to dinner twice, with each meal featuring regional dishes. I was particularly taken with labskaus (see a representative example below; the one I had was a little more posh). Perhaps I’ll spring a homemade version on labskaus on my unsuspecting wife and daughter! Then again, perhaps not. 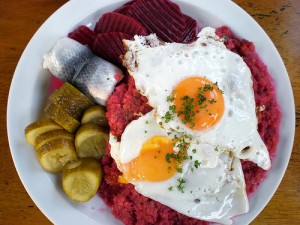 The seminars went well, and I enjoyed the opportunity to chat with the participants. As in Geneva last week, the feedback was very positive, with the word “entertaining” featuring prominently. That’s not an obvious proposition for a seminar on contract drafting.

The seminar at ECE represents the first time I’ve attempted a barter arrangement for a public seminar. I’ll spare you the details, but ECE provided the facilities and other support; in return, ECE representatives attended the seminar without charge. Maersk Line is playing that role for purposes of my Copenhagen seminar. My thanks to ECE.

This arrangement worked so well with ECE that I expect to use it for an expanded series of seminars in Europe in April 2014. As usual, I’ll be in Geneva, but other cities I’m contemplating include Frankfurt, Munich, and Zurich. And I could imagine doing similar seminars in South America and the Middle East.

Meanwhile, my thoughts have turned to tomorrow’s seminar at Maersk Line. A bunch of people from Maersk and other major Danish companies will be in attendance. It promises to be really interesting.

4 thoughts on “Notes from the Road: Hamburg”