Pizza Digressions 1: My Review of “The Joy of Pizza,” by Dan Richer with Katie Parla 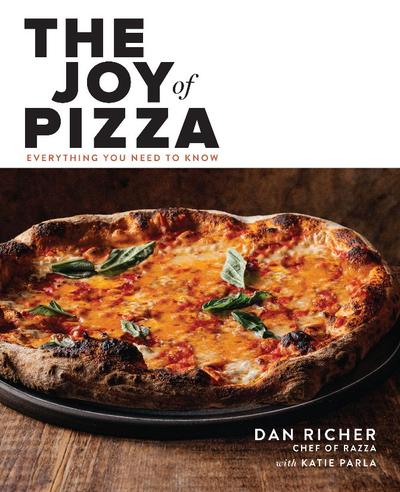 Hell is other people’s reviews.

In October I bought a copy of The Joy of Pizza, by Dan Richer with Katie Parla. Richer is owner of the restaurant Razza, a noted pizza joint in Jersey City. Parla is a food writer and cookbook author based in Italy. After buying it, I looked at some reviews on Amazon. I quickly spotted two kinds of review.

The first is, It’S tOo CoMpLiCaTeD, to which I say, there are already a zillion books out there if you want to whip up mediocre pizza.

I was intrigued by the book and spent some time with it, so I thought I’d try my hand at a review. The only credentials I have to offer are that I’ve devoted a long time to learning, too slowly, how to make decent pizza.

Let’s get one thing out of the way. I give it four, um, hearts out of five: ♥♥♥♥ (WordPress symbols don’t include stars.)

Richer’s pizza could be described as neo-Neapolitan, as distinct from Neapolitan style and New York-style (or New Haven-style, depending on your tribal allegiance). Neapolitan pizza is a one-person pizza featuring a simple tomato sauce, fresh mozzarella, olive oil, and perhaps a dusting of parmesan. It’s baked in a blazingly hot wood-fired oven for 60 to 90 seconds. It’s soft—you eat it with a knife and fork. New York-style is bigger, it uses a higher-protein flour, and usually low-moisture mozzarella is involved. It’s baked at a lower temperature (perhaps in a coal-fired oven), and it’s chewier, with none of that knife-and-fork nonsense.

Richer stakes out the middle ground, offering an individual pizza that’s sturdier and crunchier than Neapolitan, with a crust that’s more fully caramelized and so more flavorful. But it’s also lighter and perhaps more sophisticated (my word, not Richer’s) than New York-style pizza. 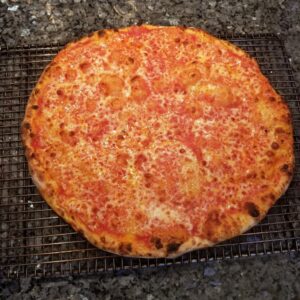 My heart belongs to New Haven-style, due to visits to the original Pepe’s. (This photo is of one of my Pepe’s-inspired pizzas.) But thanks to the opportunities afforded by my Ooni pizza oven (blog post to come), I’ve been experimenting with Neapolitan pizza, but I’ve been dissatisfied. I was ready for Richer’s take.

On page 107, he refers to “the ‘leopard spots’ on the rim that are so popular in wood fired pizza making but are in fact a flaw.” Preach! Enough with the leopard-spotting fetish. And I’m not sure buffalo mozzarella features in any of his recipes. He suggests that if you use it, you put it on pizza after it comes out of the oven. That too I was ready to hear. Although I have a supply buffalo mozzarella readily available (at Whole Foods), I’ve never understood the appeal. Compared with cow’s-milk mozzarella, which melts readily, I find that buffalo mozzarella ends up looking congealed.

A feature of the book is “rubrics” (questionnaires) for evaluating pizzas and raw ingredients. They’re helpful as a consciousness-raising exercise, but I didn’t pay much attention to them. If you own a restaurant, it makes sense to make your process industrial. Me, I’m doing a couple of pizzas once a week or once a month, so I don’t bother with the rubrics.

On the other hand, going forward I’ll determine what temperature my water should be by taking into account the air temperature and the temperature of the flour, as Richer recommends.

I’ve made four batches of Richer’s “everyday dough.” The recipe essentially applies bread-making techniques to pizza. It was quite revealing. After you mix flour, yeast, and water and then, after an interval, salt, you knead the dough. But you don’t knead it the regular way. Instead, you use “the Rubaud method”—with the dough in a bowl, you work your way around the outside of the dough, lifting an edge with a cupped fingers, then letting it fall back. You do that for 5 to 7 minutes. Initially, I thought, why am I doing this to this ragged mass of dough that doesn’t look like the pictures in the book? Then after 5 minutes, I observed that, hey, the dough ain’t ragged anymore!

Add to that Richer’s stretch-and-fold technique and the result was a dough that was lively and well-structured, compared with my various attempts at making Neapolitan dough, Caputo “00” flour and all.

But in the course of doing my four batches of dough, I decided to do three things differently than Richer recommends.

First, Richer’s everyday dough is a high-hydration dough, with 76% water. He recommends you reduce it to 68% hydration for high-temperature ovens, like my Ooni. I tried that once, but it made the dough noticeably stiffer, to the extent that it was tough to apply to the dough Richer’s stretch-and-fold technique. I wonder whether in researching the book he actually worked with 68% hydration dough. But as it was, that turned into a moot point: I found that pizzas made with 76% hydration dough were lighter and crisper than their 68% hydration counterparts. The Ooni is sufficiently versatile that I was able to avoid the burning that Richer warns about. I don’t expect to make the 68% hydration version of the dough again.

Second, with Richer’s recipe, the dough does a bulk ferment in the fridge for a day, after which you divide the dough into rounds and put it back in the fridge for at least another 12 hours. I did it that way with three of the four batches, but I found that after a day in the fridge, the structure the dough had acquired interfered with creating even dough balls. So I switched to the approach used by Ken Forkish in The Elements of Pizza: he uses a short initial bulk fermentation and a long secondary fermentation. (I’d previously done the same switch when using Joe Beddia’s book, Pizza Camp.) The dough balls ended up a bit more even, and it made the whole process simpler: I was able to mix, knead, do the initial bulk ferment, and create the dough balls over the course of 3 to 4 hours. And the dough balls were ready to go after sitting in the fridge overnight, but they were fine after a second day too.

Size of the Dough Balls 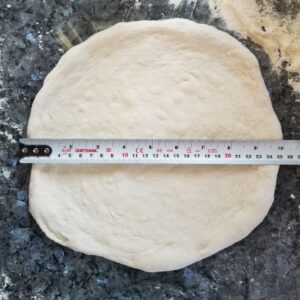 And third, the recipe for everyday dough says you should create dough balls weighing 250 grams and says they should create a 12-inch crust. That’s not what I found. Instead, I got to only 10 inches. (See the upper of the two associated photos.) In trying to get to 12 inches, I ended up putting holes in the crust. And in the resulting pizzas, the rim was as puffy as it would have been with a bigger pizza, so it occupied a bigger proportion of the surface area, leaving a relatively puny sauce-covered part. They looked a little silly.

I wasn’t surprised: in The Elements of Pizza, Forkish says that a 287 gram dough ball will give you an 11-inch crust. I don’t see how Richer and Forkish can both be right. After my first batch of Richer’s dough, I switched to making 290-gram dough balls, which did indeed yield 11-inch crusts. (See the lower of the two photos.) 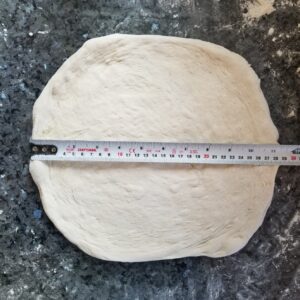 I expect that others will encounter this problem. Those who are relative newcomers to pizza might end up befuddled. I don’t think it was anything I did. For one thing, the dough wasn’t cold: I gave it a couple of hours to warm up.

It’s not the first such problem I’ve encountered in a pizza recipe. Beddia’s dough recipe in Pizza Camp calls for cool water. Anyone who follows the recipe will find themselves with lifeless dough, something that Beddia acknowledged to me.

Richer’s book helped me take the next step in my pizza education. I can now put Neapolitan pizza behind me; when I’m looking for an alternative to plying people with slices (as good as they are), I now have something interesting to offer.

I’m happy with Richer’s recipe for everyday dough, with my adjustments. I ended up making some really good pizzas—light and flavorful, with a bit of crunch to them. Below are photos of a margherita pizza (please excuse the lack of any basil), the undercarriage of that pizza, a slice of that pizza (airy rim; no floppiness), and my riff on a Beddia recipe, pizza with Swiss chard, cream, and gruyère in addition to mozzarella (it’s what I had on hand).

The bake still needs some work. I’ll have to fiddle with the Ooni settings over the course of the bake and the total time of the bake.

At some point I’ll try Richer’s sourdough recipe, but a guy can eat only so much pizza … 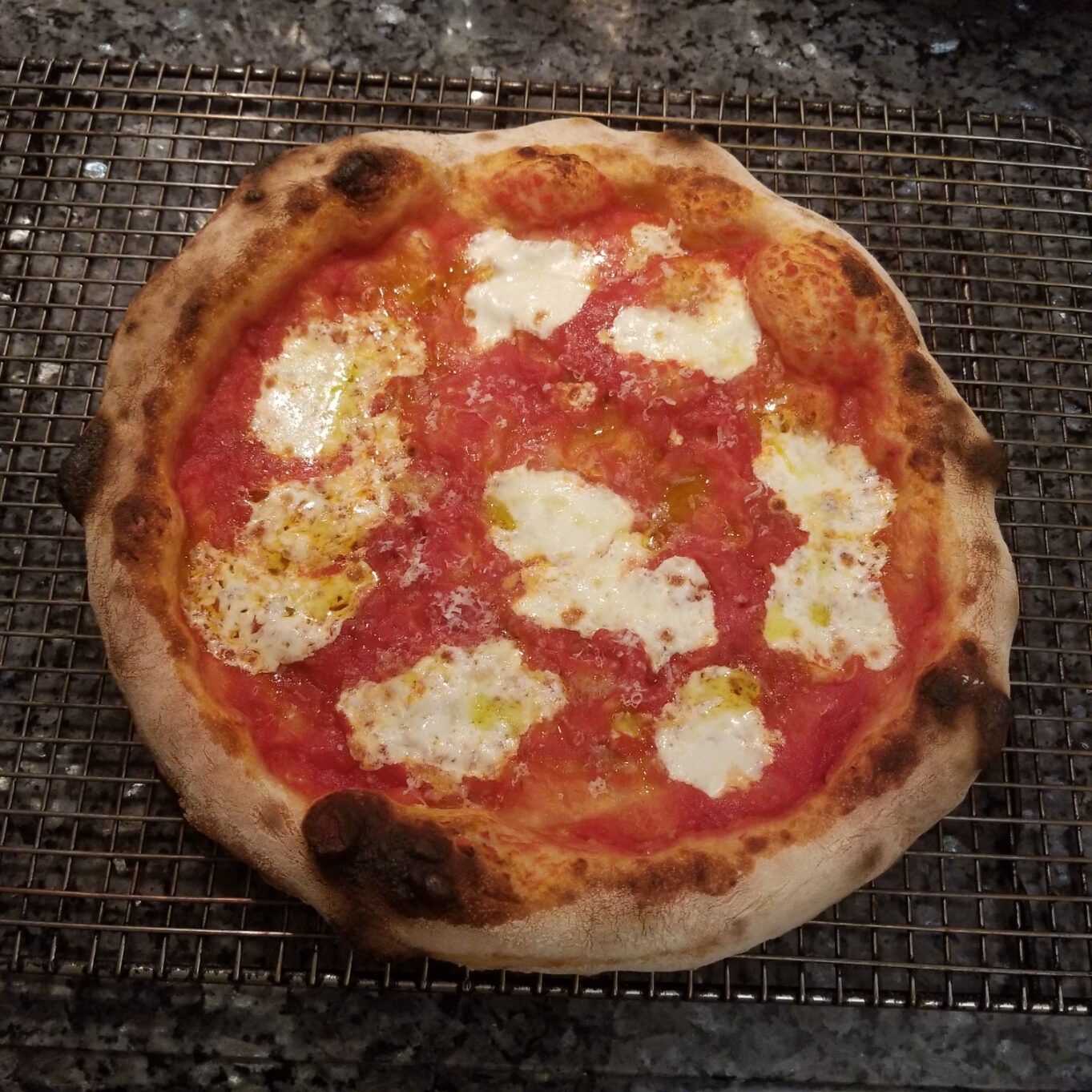 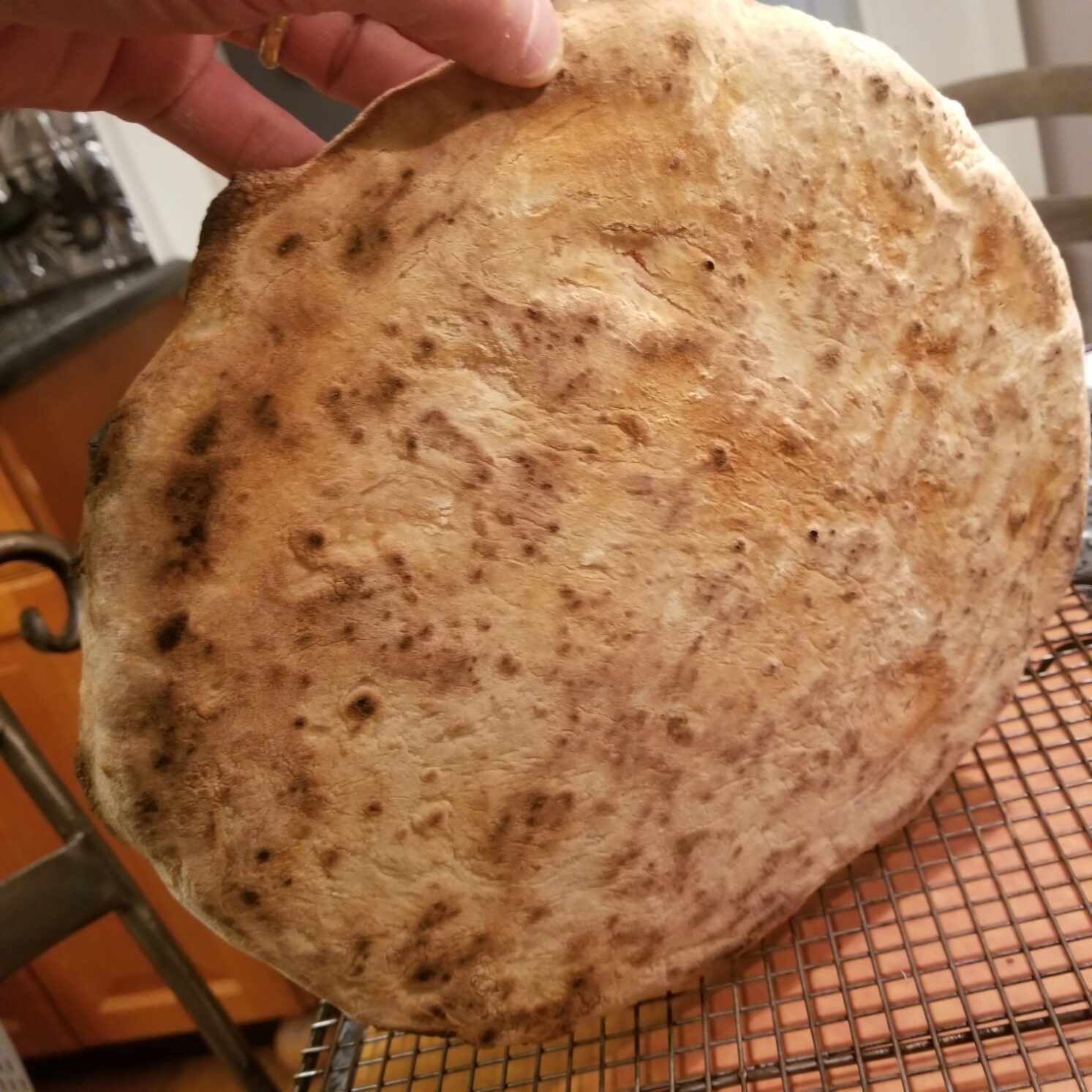 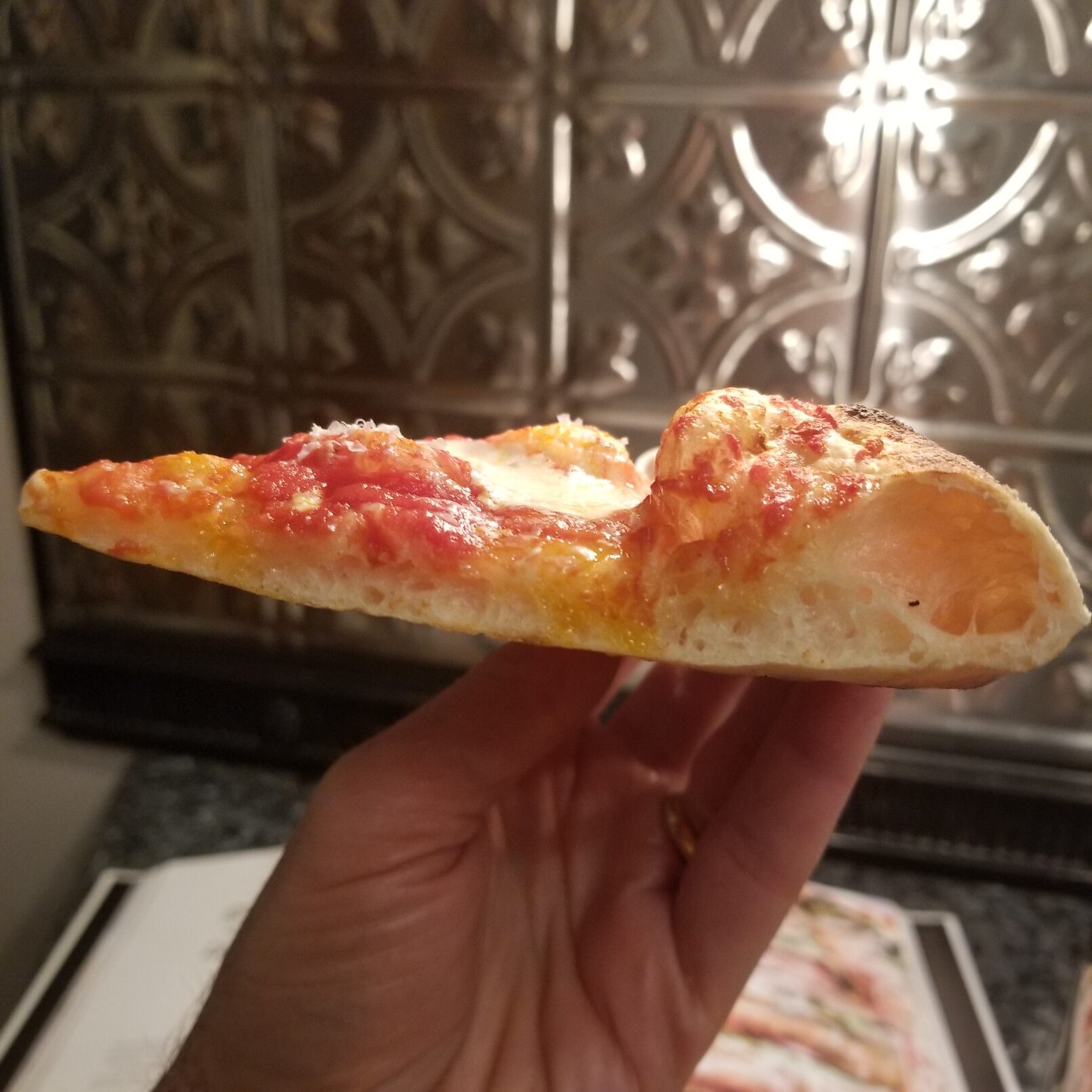 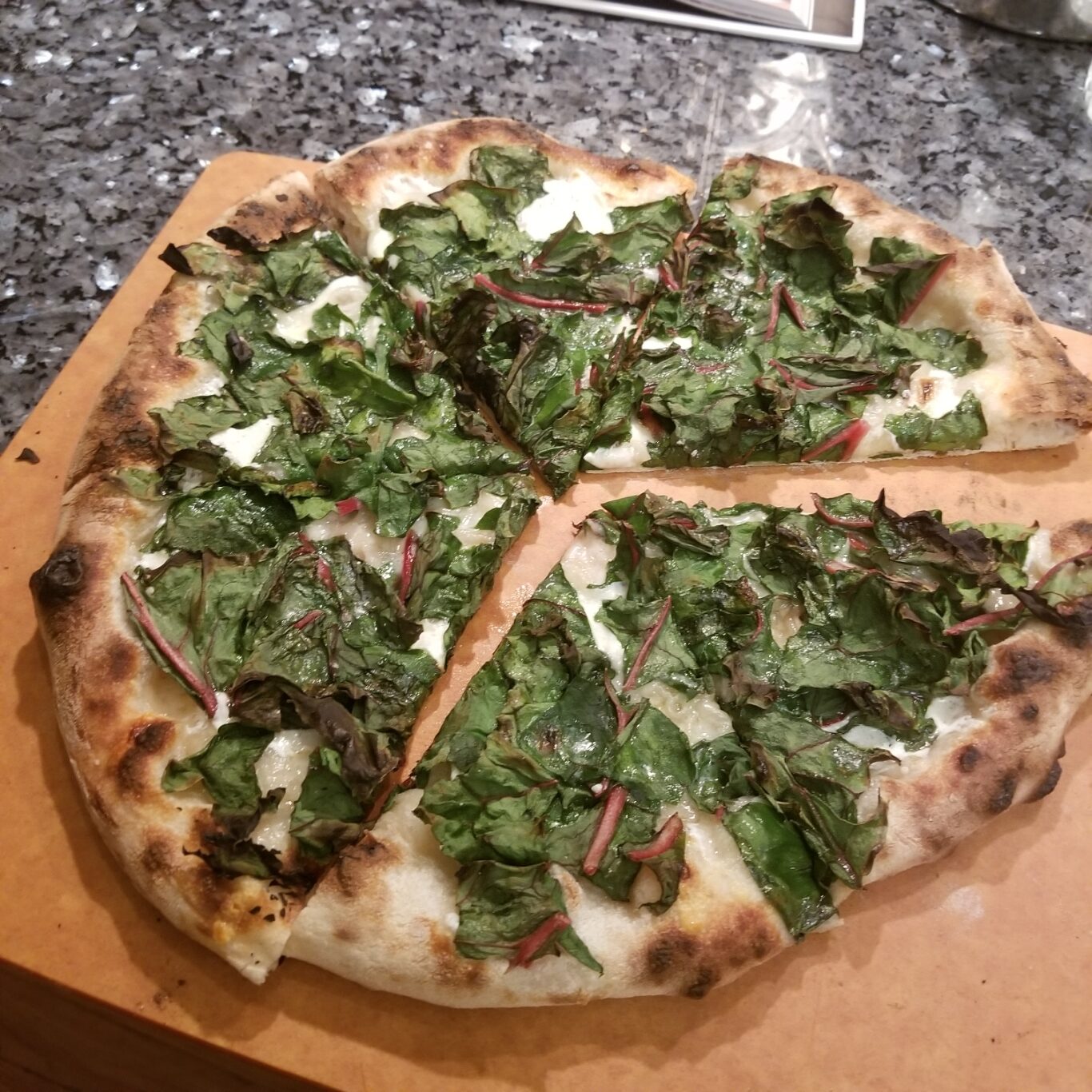 11 thoughts on “Pizza Digressions 1: My Review of “The Joy of Pizza,” by Dan Richer with Katie Parla”