Seattle, June 23, “Automate Our Contracts? But Why? And How? A Discussion with Ken Adams” 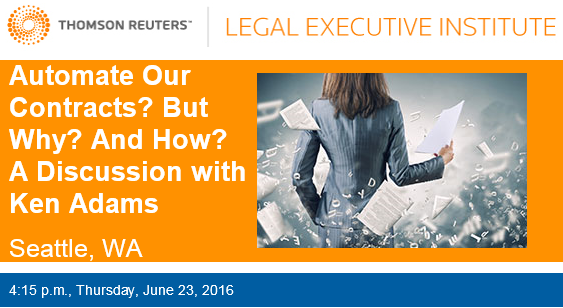 Live or work in or around Seattle? Good—listen up:

Starting at 4:15 p.m. on June 23, 2016, immediately after my Seattle “Drafting Clearer Contracts” seminar, Thomson Reuters Contract Express and I will be holding a free cocktail reception at the Washington Athletic Club, 1325 Sixth Avenue, Seattle, WA 97101.

I’ll discuss how automation offers the most effective way to scale rigorous contract language. I’ll show you how Contract Express, the premier software for automated contract creation, offers an intuitive and cost-effective way for law firms to increase profitability and for company law departments to save time and money, reduce risk, and manage demands on the legal function.

So if you’d like to find out more about contract automation and chat with me and other contracts enthusiasts, please join us.

OK, that’s my version of the just-the-facts account that Thomson Reuters will send around. That leaves the question, why am I taking part in this?

The big-picture reason is that what ails traditional contract drafting is a function of language and a function of process, and there’s a limit to what can be accomplished by addressing only the language side of things. You also have to offer an alternative to copying-and-pasting, namely making it possible for people to draft a contract by answering an annotated online questionnaire. That’s why I’ve spent a fair amount of time over the years advocating for automated contract creation.

When I built, and tried to sell subscriptions to, an automated confidentiality-agreement template, I used Contract Express. That project was like a proving ground for the technology: my template is perhaps the most sophisticated and customized piece of short-contract automation out there, so I made a lot of demands of Contract Express, and it did everything I asked of it.

And I’m no one’s idea of a techie—anyone with a mind logical enough to be a diligent drafter can learn the rudiments of Contract Express. You’re not beholden to programmers and a changing cast of not-entirely-committed salespeople, which can be the case with other contracting software.

Thomson Reuters acquired Contract Express last year, and my key contacts have moved on. But I’m sticking with Contract Express, and I’m happy to use this event to try to spread the word. (And I’m not being paid to do so.)

I hope to see some of you at this event.