I searched on EDGAR for subsist in its various forms. Although it’s used sporadically in other contexts, the 40 or so examples I looked at overwhelmingly fall into two categories.

One category is statements of fact to the effect that leases for real or personal property are subsisting. Here are some examples:

… the property held under lease by each Loan Party is held under valid, subsisting and enforceable leases with only such exceptions with respect to any particular lease as do not interfere in any material respect with the conduct of the business of such Loan Party.

… and any real property and buildings held under lease by the Company and its subsidiaries are held by them under valid, subsisting and, to the knowledge of the Company, and enforceable leases … .

And if you consider the broader context, a lease is one kind of contract. In contract references to the status of contracts other than leases, I’ve not seen the word subsisting used. Instead, one sees in full force and effect, valid, and enforceable, among other alternatives to subsisting.

So I see no reason to use subsisting when referring to leases.

The second category of uses of subsisting is in statements of fact relating to intellectual property. Here are some examples:

To the Company ’s Knowledge, all Company IP is valid, subsisting and enforceable.

All Existing Patents are subsisting and, to Licensor’s Knowledge, are not invalid or unenforceable, in whole or in part.

Except for matters that have not had, or would not reasonably be expected to have, individually or in the aggregate, a Company Material Adverse Effect, (x) all of the Company Registered Intellectual Property is subsisting and in full force and effect and (y) …

Some rooting around on Westlaw suggests to me that the source of this use of subsisting is use of the word subsists in legislation relating to copyright. Here’s section 102 of the U.S. Copyright Act of 1976: “Copyright protection subsists, in accordance with this title, in original works of authorship … .” The word subsist also appears in the corresponding legislation in the UK and Australia.

Well, excuse me if I don’t regard that as sufficient reason to keep using subsisting. In copyright statutes, the word subsists simply conveys the meaning “exists”. Who knows why the word subsists was used—I assume it reflects a haphazard preference on the part of the one of more people doing the drafting. A basic principle of rational drafting is that you don’t have to parrot the suboptimal language of statutes except in those rare cases where it’s clear that that’s required. It’s better to stick with whatever word makes sense more broadly, instead of having an eccentric choice infect your drafting.

Furthermore, it’s weird that the association with copyright has resulted in IP people using subsists with other kinds of intellectual property.

On the other hand, Ned Barlas, my IP resource of choice, tells me that subsisting patent is a term of art meaning a patent that is issued and “alive” but not necessarily valid or enforceable, and that it’s used in contracts. If that’s so, then go ahead and use it, I suppose. But the only people who will understand it are hard-core IP people, and I suspect not all of them. So IP people, you might want to come up with an alternative to subsisting patent.

You also see subsisting sporadically used instead of existing, for example in references to an entity that is subsisting under the laws of a given jurisdiction. Perhaps the following Google Viewer Ngram chart will convince you that between exists and subsists, exists is the horse to back. 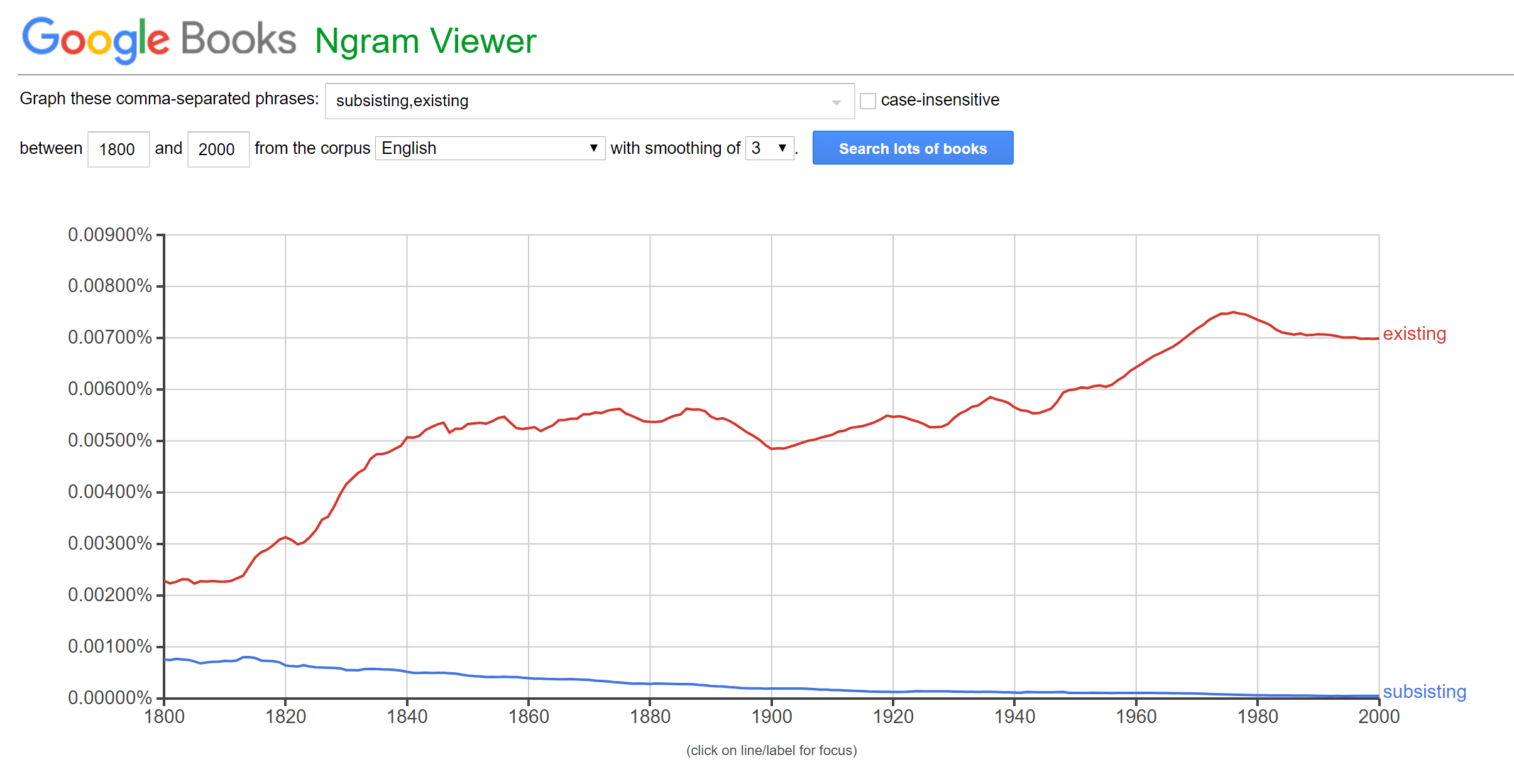 So except if you feel you really must use subsisting patent, stop using subsisting!

Regarding use of subsisting instead of existing in connection with corporate status, a reader made the following very valid point (apparently subsisting is used in Pennsylvania):

Here, though, the drafting attorneys aren’t (solely) to blame—this is usually a function of firms’ opinion policies. If the certificate of good standing says subsisting, and your opinion says that you are relying on that certificate, then the thinking is that you minimize your risk by mirroring the wording of the certificate in your opinion exhibit. (Imagined dialogue with opinion reviewer: “It means the same thing.” “We’ve never given an opinion that exists means the same thing as subsists.”) That then tracks back through the contract into the reps.

2 thoughts on ““Subsisting”? No Thanks”