The Post-truth Mindset and “Endeavours” Provisions 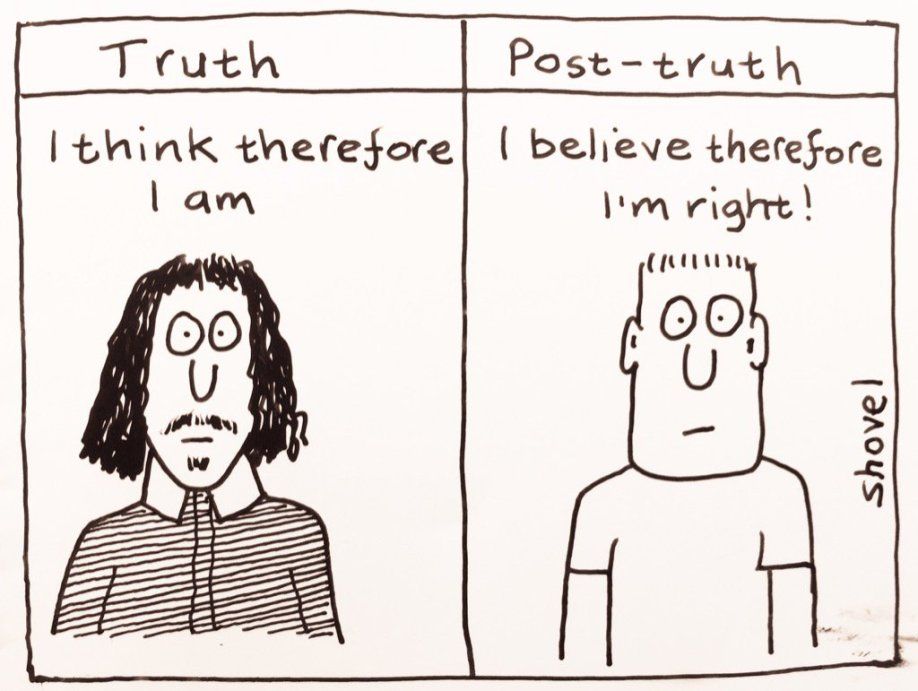 The above cartoon, by @MartinShovel, caught my eye.

I won’t claim to know whether we’re dealing with cause or effect, but a toxin coursing through civic life in both the United States and the United Kingdom is the “post-truth” notion that all that’s required to make our point of view valid is that we believe it.

There’s nothing new about this: people are prone to believing all sorts of nonsense. But what is new is that the credulous now have access to the megaphone that is social media. It gives them the means to find others who share their credulousness. From that they conclude that their viewpoint is indeed valid, whereas zero plus zero still equals zero.

I mention this because I’ve encountered essentially the same phenomenon in treatment of one of my favorite topics, endeavours provisions, the English equivalent of efforts provisions.

Allow me to recap: In stark contrast to US caselaw, a handful of English court opinions have held that different endeavours provisions impose obligations of different levels of onerousness. But when you consider etymology, semantics, and contract law, it’s obvious that such distinctions make no sense. (There’s laughable Canadian caselaw to the same effect.) I’m the first person ever to offer actual evidence on use of endeavours provisions. I’ve written about this not only in A Manual of Style for Contract Drafting but also in this 2017 article on the UK website The Lawyer (free registration required), this 2014 article in Solicitors Journal, and this 2014 article on the Canadian caselaw.

That said, I’ve never expected the English bar to roll over and accept my conclusions. But given my articles and my annual “Drafting Clearer Contracts” seminars at UCL Faculty of Laws (information here), I’d have thought that I’m visible enough, and plausible enough, to warrant some level of engagement. But that’s not what has happened.

For one thing, there’s no sign that anyone other than me is inclined to question the English conventional wisdom. It keeps being trotted out, hence this tweet:

If you want yet another indication of the intellectual bankruptcy of the English legal profession on "endeavours," check out this from @GowlingWLG_UK: https://t.co/VNQhRaHfkN

If someone were to suggest that I’m intellectually bankrupt, you can be sure I’d respond. But not a peep from the people responsible for the analysis that prompted my tweet.

The same disengagement is on display in an English review of the fourth edition of MSCD. The authors’ sole contribution to this discussion was to say, “But does ‘best’ really equate with ‘reasonable’?” That’s not scholarship, it’s glib innuendo.

Only when I press people do they explain why they’re sticking with the conventional wisdom. And all they have to offer is the post-truth rationale that people think the distinction exists, so it must exist! Here’s how a Canadian lawyer expressed it to me:

The solicitors I work with all understand that it matters to a client whether it undertakes to use “reasonable efforts” or “best efforts” — and clients understand that too; they know that the choice affects the risks the contract creates.

The same justification was offered by three of my fellow panel members at a 2016 panel discussion hosted by UCL Faculty of Laws: if endeavours distinctions are accepted by lawyers, the distinctions must be valid. (See the discussion starting at 59:40 in the video of the event, here.)

The we-believe-it-so-it-exists approach to contract interpretation makes a mockery of the notion that English courts look to the natural and ordinary meaning of words when interpreting a contract. And the we-believe-it-so-it-exists approach isn’t limited to endeavours provisions, it’s just that in the case of endeavours provisions the conflict with everyday meaning is so blatant.

What explains the post-truth mindset being applied to contract language? I suspect it’s a byproduct of the factors that make for dysfunctional contract language everywhere: a legalistic approach to terminology; the assumption that how courts interpret confusing contract language dictates how best to express something in a contract; and the lack of semantic acuity that comes from riding the copy-and-paste train. (Dysfunction is of course endemic in English drafting; see this 2016 post for my dissection of a random bit of “Magic Circle” drafting.)

I’m always happy to be proven wrong, but awkwardly enough I’m clearly on the winning side of this argument. So you have the choice of conceding that I have a point or ignoring me. The English legal establishment has invested sufficiently in its bogus endeavours distinctions that cognitive dissonance (see this 2013 post) is an obstacle to changing one’s mind.

But the saving grace is that contract drafting doesn’t work like electoral democracy, where the majority sets the agenda. Instead of buying into the English legal establishment’s post-truth flimflam, you’re at liberty to handle endeavours provisions in a way that makes sense, thereby avoiding confusion. The fix is simple enough and would hardly mark you as a radical: you can stay out of trouble by using only reasonable endeavours (or reasonable efforts, if you’re in a twenty-first-century state of mind). To express anything more than that, you had best be specific.

And once you get beyond the whole reasonable versus best thing, subtle issues remain. That’s why chapter 7 of A Manual of Style for Contract Drafting devotes 20 pages to the topic.

(Bonus: Go here for my exchange with an English reader about this post.)