It’s been a while since I’ve had occasion to write about layout. Here are two issues relating to enumeration in articles. Be still my beating heart.

First, last week I gave an in-house seminar at the Beijing unit of an international consortium. As usual, my PowerPoint seminar contained examples drawn from the host’s template contracts, but at the start of the seminar someone emailed me another of the host’s templates, and late that morning I opened it, put it on the screen, and discussed with the participants the usages on display. One of the participants pointed out that the definition section, which was at the beginning of the body of the contract (sigh), was designated article zero. Article zero! I can’t think of a good reason for doing that, but somehow it seems badass.

But apparently, article zero is a thing. At least, it exists on the SEC’s EDGAR system. Most instances appear to be due to glitchy automatic cross-referencing. But here’s one real example:

WEG intends to work with NPS in order to produce and market a 3.3 MW wind turbine on the terms and conditions of this Agreement.

And here’s a third, one that matches the example I saw in Beijing:

When You Have Only One Paragraph in an Article

And second, on page five of this 2014 post on Lawyerist by Barron Henley entitled “Five Microsoft Word Rules You Must Follow,” he offers the following as one of the “big rules” of outline paragraph numbering and formatting: 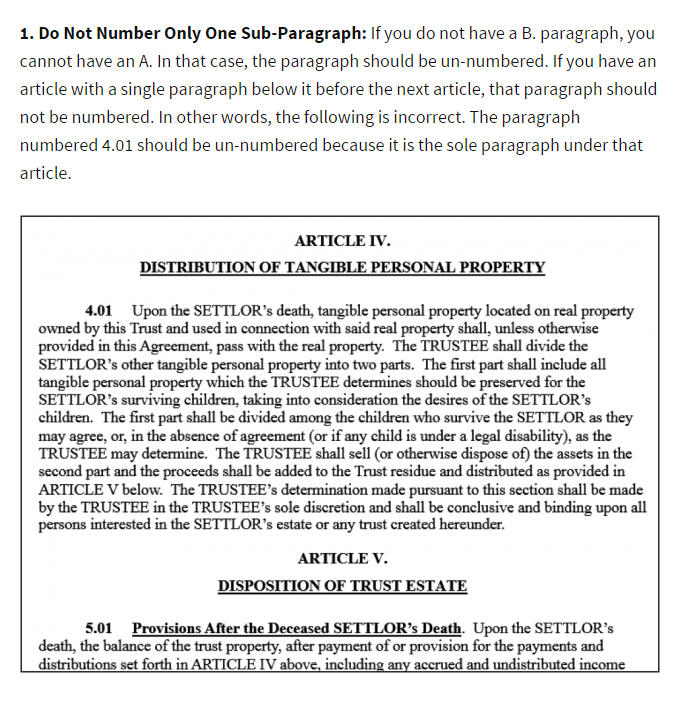