Hey IP people. Just saw this: "… all right, title and interest throughout the world in and to all such Intellectual Property rights shall vest solely in such Service Provider …." Aside from the other clutter, why "vest"? Why not just "the Service Provider will own all"?

It was prompted by my despair at the umpteen different ways people find to say the same thing. If you strip away the redundancy, your verb structures become much more manageable. 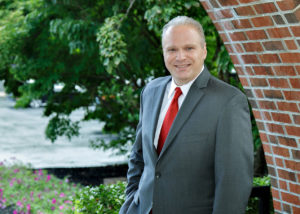 I thought I could do better than cry out into the Twitter wilderness, so I contacted my primary IP resource, Ned Barlas. That’s him to the right. (Ned was in the year below me at Penn Law Review, although I don’t think either of us would claim that our sterling characters were forged in the white-hot heat of Penn Law Review, or some such.)

Here’s what Ned had to say:

“The Service Provider will own …” means the same thing as “shall vest”. (of course, that shall fails the famous MSCD “has a duty” test; we know it really means will). Either way, it’s language of policy. But it falls short, as both formulations aren’t sufficient to give ownership to the party in question.

IP ownership is conferred under a contract in one of two ways: A contract can establish ownership rights through language of assignment (either present assignment using language of performance, as in Acme hereby assigns, or an obligation to assign) or because the contract otherwise meets specific requirements that result in a party owning the IP.

For example, a contract for specific services that meets the statutory requirements for a “work made for hire” agreement under U.S. copyright law will result in the hiring party being the owner and author of the work product (rather than the independent contractor who does the work), even absent words of assignment. If the same work were performed without the contract—or with a contract that doesn’t contain the magic words work made for hire, then the contractor would be the author and, absent an assignment, the owner of the copyright in the work product.

But the scenario in your tweet isn’t that kind of scenario, so instead we need a present assignment. Vest wouldn’t accomplish that, but neither would own. Instead, we need language of performance.

The moral of this story is one you know already, and I’m sure you would have remembered it if you had considered the language in its broader context—when you’re dealing with IP, everything is more complicated than it seems!

So I’m half right, in that we can dispense with vest. But in this game, half right gets you nowhere. Serves me right for looking at a few words in isolation. Excuse me, I now have to go flog myself with a wet noodle.