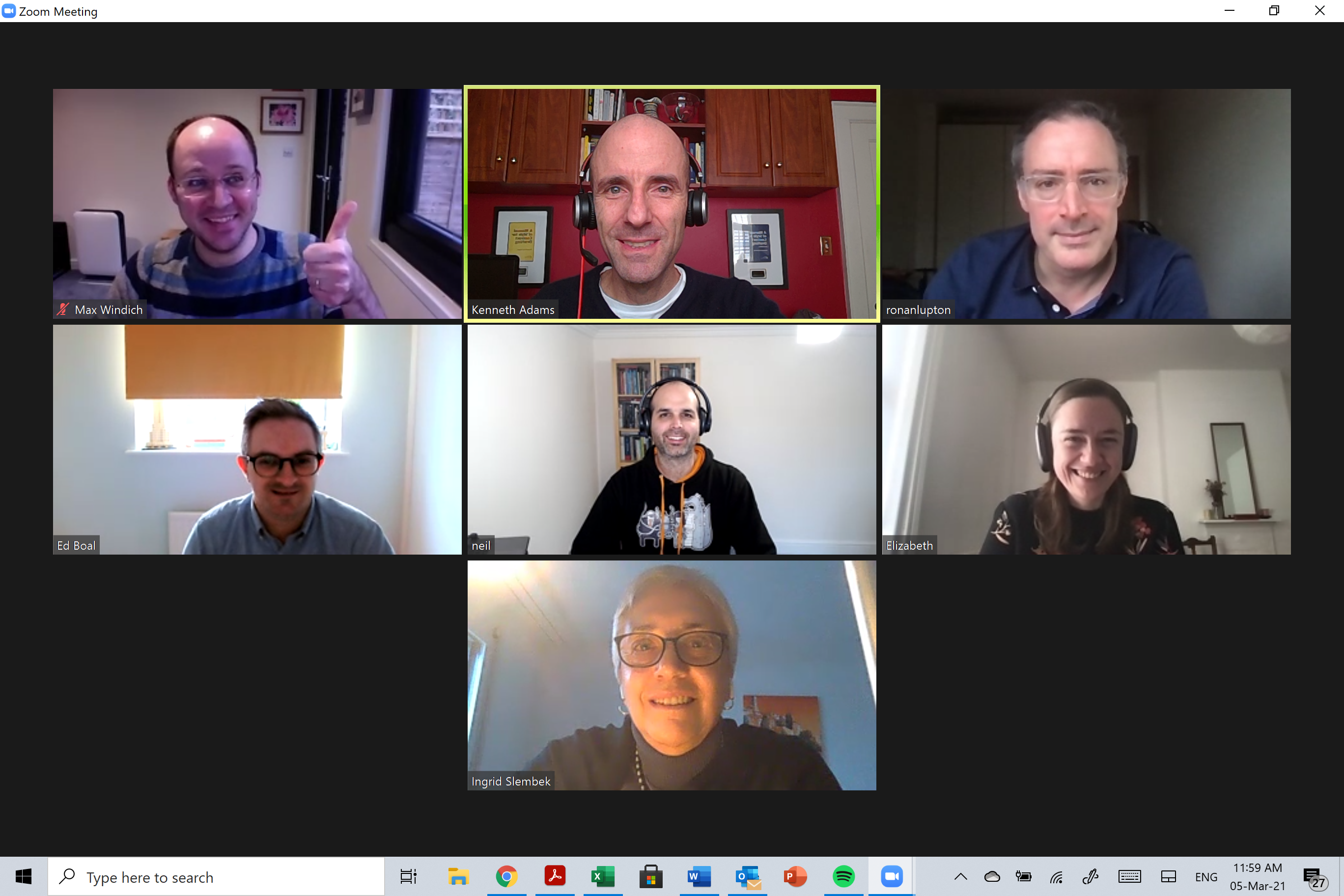 Last week I oversaw session 8—the final session—of the series of Drafting Clearer Contracts: Masterclass intended for the UK and Ireland. A couple of days later most of the group then gathered for a celebratory Zoom session—a nice idea. That’s when I took the screenshot above.

No More Series Limited by Country

I don’t think I’ll do another “UK & Ireland” series, or any series intended for people from a given country or region. Don’t get me wrong—I thoroughly enjoyed this series, it’s just that it’s not clear exactly who the intended participants were. Anyone located there, whether residents or just passing through? And regardless of their training and the kind of contracts they work with? And what about people outside of the UK and Ireland who work with contracts governed by the law of a UK jurisdiction or Irish law? Do I exclude them? Evidently not, as a couple of people who participated in this series live elsewhere.

As I’m not inclined to start vetting people, any “UK & Ireland” group is likely to be sufficiently eclectic as to make the geographic limitation beside the point. So from now on, the only constraint on which Masterclass you attend will be the time of day when the sessions start. That will have the added benefit of being conducive to somewhat larger groups.

It’s no surprise that I hadn’t thought all this out. I was prompted to do this series mostly by my history with England: I spent my formative years there, from age 11 to 25; my parents lived there until they died; and my sister and her husband still live there. Since I wasn’t able to get to England last year and probably won’t this year either, this series offered a way to connect.

What They Thought of It

Because this was a particularly keen group, they were quick on the uptake—they made short work of some tricky stuff that usually has most participants scratching their heads, at least initially. But it seems they nevertheless found Masterclass worthwhile.

I’ve long been out of the business of blurb farming. (That’s a term I just made up—it means importuning participants at one of my presentations to say nice things for public consumption.) And it’s been even longer since I stopped identifying blurbers by name. Mostly I’ve relied on unsolicited testimonials, such as the one I use in this blog post about Masterclass.

But given that the participants in this series are on display in this post, it seemed a little silly not to name names. And they insisted on saying nice things, even when I invited them to say something about, oh, I dunno, cross-cultural trends in legal education.

So here’s what they had to say.

Deciding whether to take Ken’s Drafting Clearer Contracts: Masterclass is like Neo’s choice between taking the Blue Pill or the Red Pill. You take the Blue Pill, the story ends. You live in blissful ignorance, believing you’re the best at what you do while perpetuating bad drafting habits for the rest of your career. You take the Red Pill and Ken shows you how deep the rabbit hole goes. Give me a contract now and all I can see is The Matrix!

This is from Max Windich (top row, left)

It’s been excellent, and paying immediate dividends in my work. The Manual of Style is getting enough use to have a permanent place in the reference pantheon within arm’s reach on my desk. I feel much more attuned to potential ambiguities which might previously have slipped under the radar (and rather humbled by how much there was to learn).

I took Ken’s “Drafting Clearer Contracts” one-day seminar in Geneva in 2014. Since then I’ve followed Ken’s blog and did not hesitate to register for the UK & Ireland Masterclass which suited my time zone. Regardless of whether I agreed with all of the recommendations in the 4th edition of A Manual of Style, I admire Ken’s unwavering dedication to the “cause” and my drafting has certainly improved as a result of my participation in Masterclass. Anyone serious about improving their drafting skills can only benefit from a Masterclass with the contract drafting evangelist.

As for Neil Brown (middle row, center), he devoted this blog post to the subject.

My thanks to them and the others in this series.

Last week saw the end of three Masterclass series and the start of four more. The (virtual) road goes on forever. I hope to see some of you in Masterclass.