A Print Edition of “The Structure of M&A Contracts”? Praise Be! 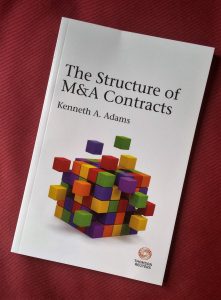 You remember my book The Structure of M&A Contracts? Yeah, that one.

It was published in 2011, ebook only, using Thomson Reuters’s Proview platform. But for reasons that I never quite understood and would rather not dwell on, buying it was a nightmare. Every month or two I would receive an email from someone who had tried to buy it and given up. So the book has been in limbo, sort of published but not really.

But thanks to continued interest in the face of logistical obstacles, it became the book that would not die. And with arrival of new faces at Thomson Reuters, the unthinkable happened—five years after publication, they decided to do a print version!

Here’s some stuff you should know:

Second, if you have a device that’s conducive to reading ebooks, I suggest that you get the Proview version. It’s spiffy, it has bigger type than the print version, and it’s in color (the print version is greyscale). I’m hopeful that the purchasing glitches that bedeviled the ebook’s first five years have been resolved; if they haven’t, I’d like to hear about it!

Third, go wild and buy both versions. The book’s cheap enough that you can do that.

Fourth, the book is also cheap enough to consider buying it in bulk. On top of that, you get a 20% discount if you buy in bulk. If you’d like to buy at least 20 copies, of either the print version or the ebook, please contact Beth Murthy of Thomson Reuters, at elizabeth.murthy@thomsonreuters.com and at +1-651-687-3556.

The book wouldn’t have hung on the way it has if it weren’t good. Go here to read an extract from the preface explaining what’s distinctive about the book and see three kick-ass testimonials.

And here’s another testimonial, from someone who used the book this year while teaching a course on M&A at Fordham Law School:

Ken’s book is great for helping students—well, anyone—understand the interplay of the parts of an M&A contract. My class gave it very high marks. It was particularly useful in helping them distinguish between representations, obligations, and conditions. I learned of the book partway through my course; I wish I had been able to use it from the start.

The head of M&A of a global electronics company told me that he gives the book to every new hire. Of course, given the problems with buying the book, he probably sent around a photocopy. There would be no need for that now!

The book has lasted well—there’s nothing significant that I would want to change.

Thomson Reuters would like to do a second edition. That would allow me to update the book by eliminating all references to represents and representations—in 2011 that was my alternative to represents and warrants and representations and warranties—and replacing them with states and statements of fact. So M&A readers, prepare to have your heads implode when the second edition appears. But that won’t happen for a couple of years, so don’t use that as a reason for holding off buying the first edition.

In this blog post I proposed the idea of doing a lunchtime question-and-answer session about The Structure of M&A Contracts. I still think that’s a great idea.

3 thoughts on “A Print Edition of “The Structure of M&A Contracts”? Praise Be!”