When it comes to my computing needs, what’s most distinctive isn’t that I write stuff, or that I have websites and a blog, or that I record the occasional webinar. Instead, it’s that I roam the world giving PowerPoint presentations as part of my “Drafting Clearer Contracts” seminars, with my presentations featuring extracts of contract text on which I scribble during my seminars. 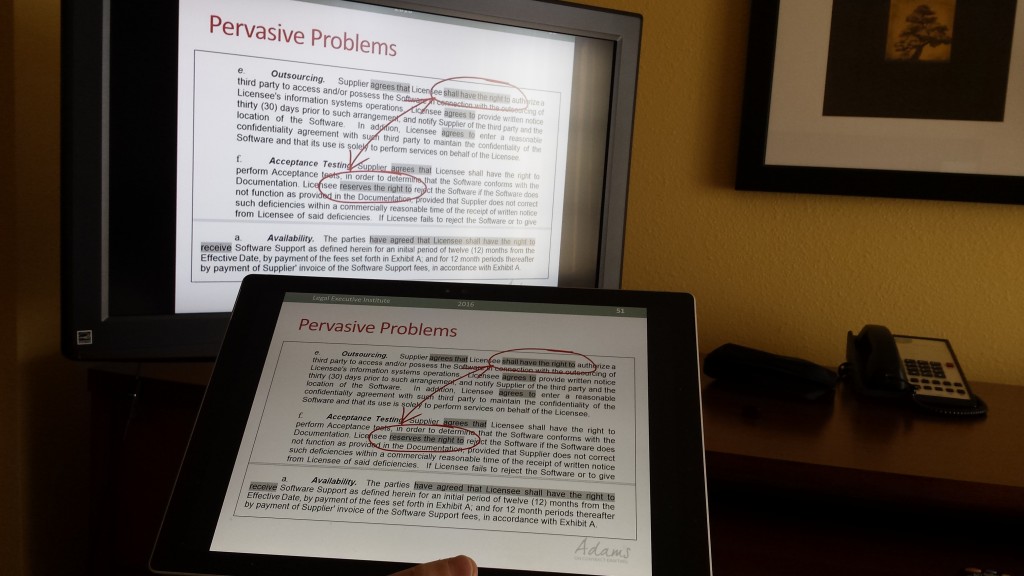 I now use a Microsoft Surface Pro 4 to annotate my presentations. (The photo above is of my SP4 and a hotel-room TV, each showing an annotated PowerPoint slide.) In this post I explain why, and I consider the pros and cons. 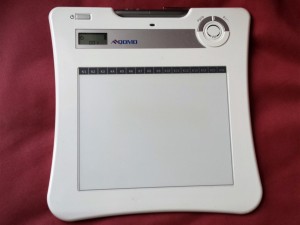 From 2010 until late last year, my seminar rig consisted of a Dell XPS L401X laptop and a Qomo QIT30 tablet. (That’s my Qomo tablet in the photo to the right.) There’s nothing much to say about the Dell—it was a reliable workhorse. By contrast, the Qomo tablet was something of an oddity, routinely drawing quizzical glances from operatives as airport security stations. That’s because it doesn’t have a screen.

For my seminars, I would connect my laptop to the projector in the seminar room, using a VGA cable. I would then connect the Qomo tablet to my laptop by means of a USB dongle in my laptop. Whatever I would mark on the blank plastic surface of the tablet with the accompanying stylus would appear on the PowerPoint slide on my laptop screen and on the projected image in the seminar room. For me, the effect was comparable to what I imagine performing arthroscopic surgery would be like for a doctor: instead of watching what I was writing with the stylus, I would watch the projected image.

But by the end of 2015 my Dell had slowed down drastically—it was time for a change. And continuing to use my Qomo tablet wasn’t really an option, as Qomo is phasing it out and won’t be producing a Windows 10 version.

I’d heard about the Microsoft Surface Pro 3, and I found it appealing for several reasons. Having a tablet with a detachable keyboard would allow me to use the tablet for presentations, then add the “type cover” for other work. The Surface Pro was powerful enough that I could also use it as the primary computer in my home office. My messenger bag would be considerably lighter, as the Surface Pro would replace both my heavy laptop and the Qomo tablet. And I learned about the Microsoft Wireless Display Adapter, which I could use to connect wirelessly to a projector.

I decided to hold out for the Surface Pro 4, and I waited for news of it like some addled fanboy. Last December bought the 256GB, Intel Core i5 model, plus a type cover with fingerprint recognition.

I’m not prone to mad excitement over technology, but graduating from my Dell and Windows 8 to the SP4 and Windows 10 has been quite a change. The SP4 is a majestic machine. But you don’t need me to provide you with general information about the SP4—there’s no end of that sort of thing online. Instead, let’s consider those factors relevant to my traveling around giving PowerPoint presentations.

The following discussion compares my SP4 with my Qomo tablet. That’s not the sort of face-off you usually see, in that I’m comparing a new product with an oddity that’s on its way out. But I think the comparison will help highlight the strengths and weaknesses of using an SP4 for PowerPoint presentations.

But when it comes to giving presentations, the difference in weight between the SP4 (1.73 lbs, or 786g, without the type cover) and the Qomo tablet (1.22 lbs, or 612g) is noticeable, even more so when I have to use the SP4 with a VGA cable (See “Connection to Projector.”) I have waved the Qomo tablet around all day with no ill effects, whereas my left forearm has at times grown sore from cradling the SP4 for an hour and a half. But I can do simple annotations with the SP4 resting on a table, so I don’t have to hold it quite as much as I did the Qomo tablet if I don’t want to. SP4 Score: 7/10.

I’ve reconciled myself to having a twenty-first-century computer in a world with lots of twentieth-century projectors. The Microsoft Wireless Display Adapter requires an HDMI connection. If a seminar venue has only a projector with a VGA connection, I have to connect to the projector instead with a VGA extension cable that I carry around with me. Not only does that make the SP4 heavier, it also makes me feel as cumbersome as one of those old deep-sea divers with a big copper helmet, bulky suit, heavy boots, and air hoses running to the surface. I have to watch out that I don’t trip over the cable. SP4 Score: 10/10 (with HDMI projector), 5/10 (with VGA projector).

Whether I use the Qomo tablet or the SP4, the annotations are identical. But it’s easier to annotate slides using the SP4, as I can look at the writing surface rather than at the projected image. That’s also better in terms of my interaction with seminar participants, as I don’t have to turn to watch the screen whenever I annotate a slide. SP4 Score: 10/10.

As for erasing, I programmed the Qomo tablet’s strip of programmable “macro keys” so that pressing the stylus anywhere along the strip would delete all annotations on the slide. Deleting individual annotations was too laborious. By contrast, using the top button on the SP4 pen as an eraser allows me to delete annotations one at a time, and without an erasing motion—all that’s required is that you touch an annotation made with one continuous stroke and the entire annotation disappears. If I’ve annotated a slide heavily, erasing all the annotations requires bouncing the eraser around the slide, but it’s not a big deal. I could instead click the right-click button, select “Pointer Options,” then select “Erase All Ink on Slide,” but generally I don’t bother. I think it would make sense to allow users to customize the pen so that pressing the right-click button deletes all annotations. SP4 Score: 9/10.

The Qomo tablet has buttons for advancing slides or going back to earlier slides, and you can also use the stylus to the same end. With the SP4, I swipe left or right with my hand, although I could use a finger or the pen to click an arrow. SP4 Score 10/10.

I suspect that with the battery on the Qomo tablet fully charged I could do three seminars back to back. With the SP4 I get through a seminar (eight or nine hours from beginning to end), but I make a point of plugging in the power cord during the breaks. SP4 Score 9/10.

To render the Qomo tablet inoperable, I’d have to take a hammer to it—it has no screen and very limited innards. By contrast, it’s easy to imagine the SP4, with its slick surfaces, slipping through my fingers and hitting a hard floor in some airport terminal or conference room. I purchased this case for it, but I don’t use it—it seemed too much of a shame to encase the SP4’s clean metallic lines in nasty plastic, and I didn’t like the way the case prevented me from clipping the pen to the SP4 using the magnet on the left edge. When I bought the SP4 I opted to add accident insurance, but perhaps the gods of technology will be benevolent and spare me from needing to use it. SP4 Score 8/10.

I don’t begrudge Microsoft what I paid for the SP4. And because I’m not comparing it to another currently available product, I won’t score the SP4 on price. But the Qomo tablet was dirt cheap—a couple of hundred bucks.

So the Surface Pro 4 has been a good choice for my presentation needs. If the Qomo QIT30 were available for Windows 10 computers, I might entertain the notion of getting a traditional laptop and a Qomo tablet. That way, I’d get the Qomo tablet’s light weight and durability. Even more important, to go wireless I wouldn’t have to depend on a given seminar venue’s having an HDMI projector.

But I suspect that even then I’d go for the SP4, because it makes it easier for me to annotate PowerPoint slides and erase the annotations, and because it’s appealing to have one device for all my needs.

But all that is moot, because the QIT30 isn’t available for Windows 10.

So to my Qomo QIT30 tablet, I say thank you for years of faithful service. Long live my Surface Pro 4—and bring on the HDMI projectors!