Section 13.1(e) of AstraZeneca’s Contract with the European Commission: Statements of Fact or Future Facts?

You might well be aware of the dispute between AstraZeneca (AZ) and the European Commission (EU) over supplies of AZ’s COVID-19 vaccine. (Go here for an account from the Guardian.)

The EU has made the contract available the public (here). AZ’s obligation to use “Best Reasonable Efforts” has attracted attention, but no one is suggesting we’re dealing with the fatuous notion of a hierarchy of efforts standards, so I was prepared to sit this one out. But then Alex Hamilton started tugging at my sleeve. 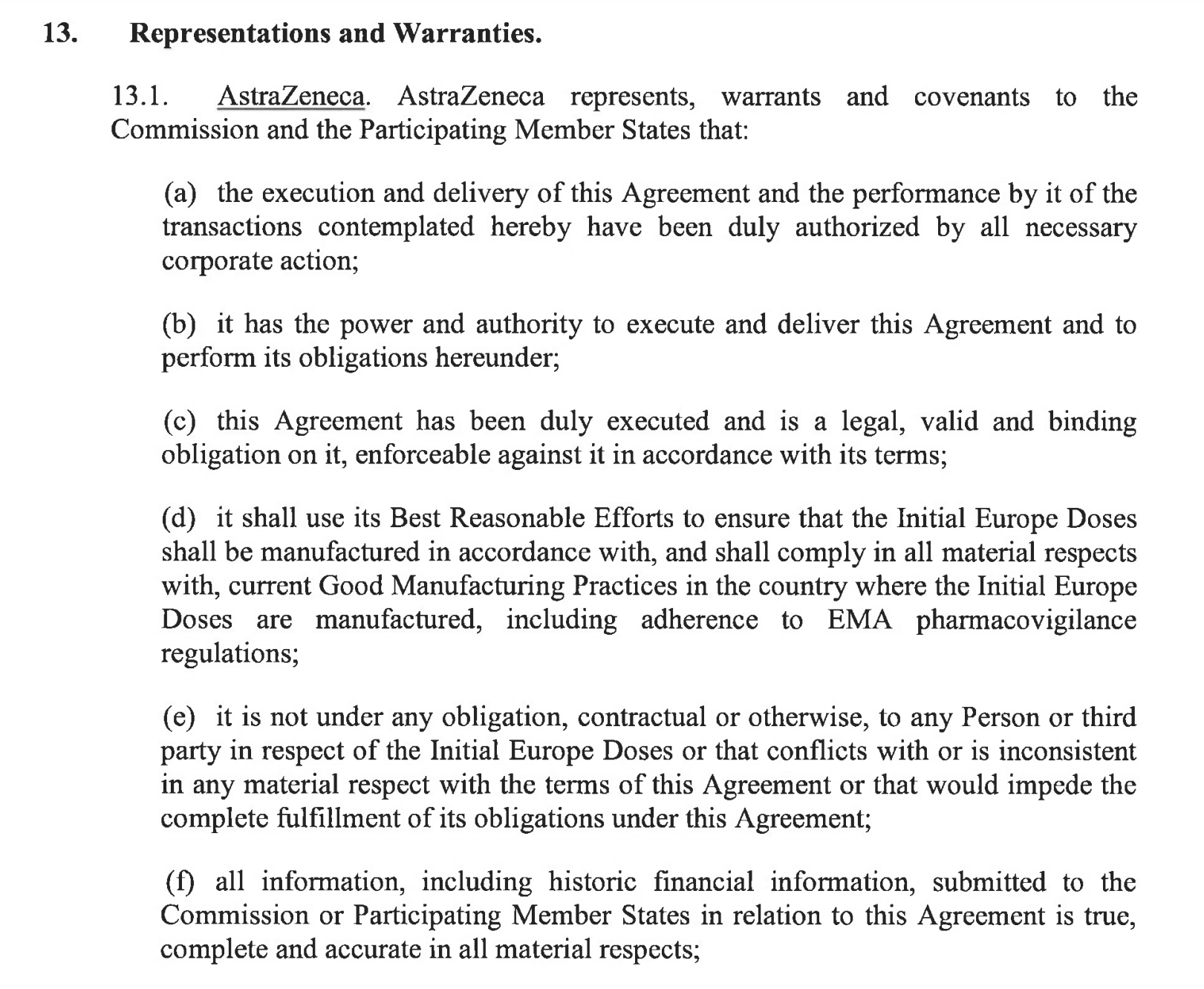 And here’s Alex’s question to me:

Section 13.1(e) of the EU and AstraZeneca agreement seems to raise a thorny problem for AZ:

AZ entered into the agreement three months after it had contracted with the UK. AZ probably thought that the agreements weren’t, and wouldn’t be, in conflict. But with the reported delays in production at its EU-based sites, it appears that it might have found itself in the unfortunate situation of having enough vaccine to support in full either the UK order or the EU order, but not both. If AZ allocates supplies of vaccine to the UK at the expense of the EU, that would seem to have the effect of rendering section 13.1(e) inaccurate.

The agreement is governed by Belgian law, is redacted, and we don’t know all the facts, but it seems to me that section 13.1(e) is worth looking at in terms of how statements of fact can unexpectedly land you in trouble.

In considering Alex’s question, my starting point is that a statement of fact is either accurate or inaccurate—it cannot become inaccurate. If one could say that AZ’s assertions in section 13.1(e) became inaccurate, that could only be because they’re not statements of fact regarding circumstances at signing but instead look to the future—in other words, that they’re what I call “future facts.” Here’s an example of a future fact: The Units will comply with the Specifications.

Future facts are in effect predictions or risk-allocation mechanisms. It would be clearer to express either meaning directly instead of couching it as a future fact. (For more about future facts, see this 2020 blog post.)

AZ would presumably argue that its statements in section 13.1(e) pertain to circumstances at signing—that because at signing its production problems hadn’t materialized, there wasn’t anything inconsistent between its commitment to the UK and its commitment to the EU. That argument has some appeal. If WidgetCo’s factory can produce one million widgets a year, there’s nothing inconsistent in WidgetCo agreeing to sell 400,000 widgets a year to Alpha Corp. and then agreeing to sell another 400,000 to Beta Inc. If a fire subsequently cut WidgetCo’s annual output by 40%, that doesn’t render illegitimate WidgetCo’s calculus on signing the contract with Beta Inc.

Similarly, AZ would presumably argue that at signing there wasn’t any indication that the UK commitment would impede AZ from performing under the contract with the EU. If the contract with the EU had said “might impede,” that would have meant that AZ wasn’t aware of any circumstances—including possible production problems—that could conceivably impede its performance. As it is, section 13.1(e) refers to circumstances that AZ knew at signing were an impediment. That’s a narrower standard.

So AZ could argue with a straight face that its statements for act in section 13.1(e) were accurate. But the current mess shows that the contract did a poor job of handling risk. Specifically, the contract should have addressed the implications of a shortfall in production. For that failing, both AZ and the EU—and their respective lawyers—are to blame. That AZ could argue that its narrow statements of fact in section 13.1(e) are accurate might end up being cold comfort.

While I’m at it, the structure of section 13.1(e) is unhelpful, in that the verb structures in the lead-in (“Astrazeneca represents, warrants and covenants”) signal that two categories of contract language follow, namely what I call language of declaration (for asserting facts) and language of obligation. (Go here for an introduction to my categories-of-contract-language framework.) Sure enough, clauses (e) and (h) are obligations; the rest are statements of fact. Why commingle the two? Instead, put obligations in one place and statements of fact in another. See this 2019 blog post for more about this kind of commingling.

And the verb structures the drafters chose are lame. Covenant is archaic. And represents and warrants is catastrophically, weirdly legalistic for no purpose, as I explain in this 2015 article. (No one has offered anything approaching a meaningful critique of my argument. I’m not surprised—I don’t think meaningful critique is possible.)

1 thought on “Section 13.1(e) of AstraZeneca’s Contract with the European Commission: Statements of Fact or Future Facts?”