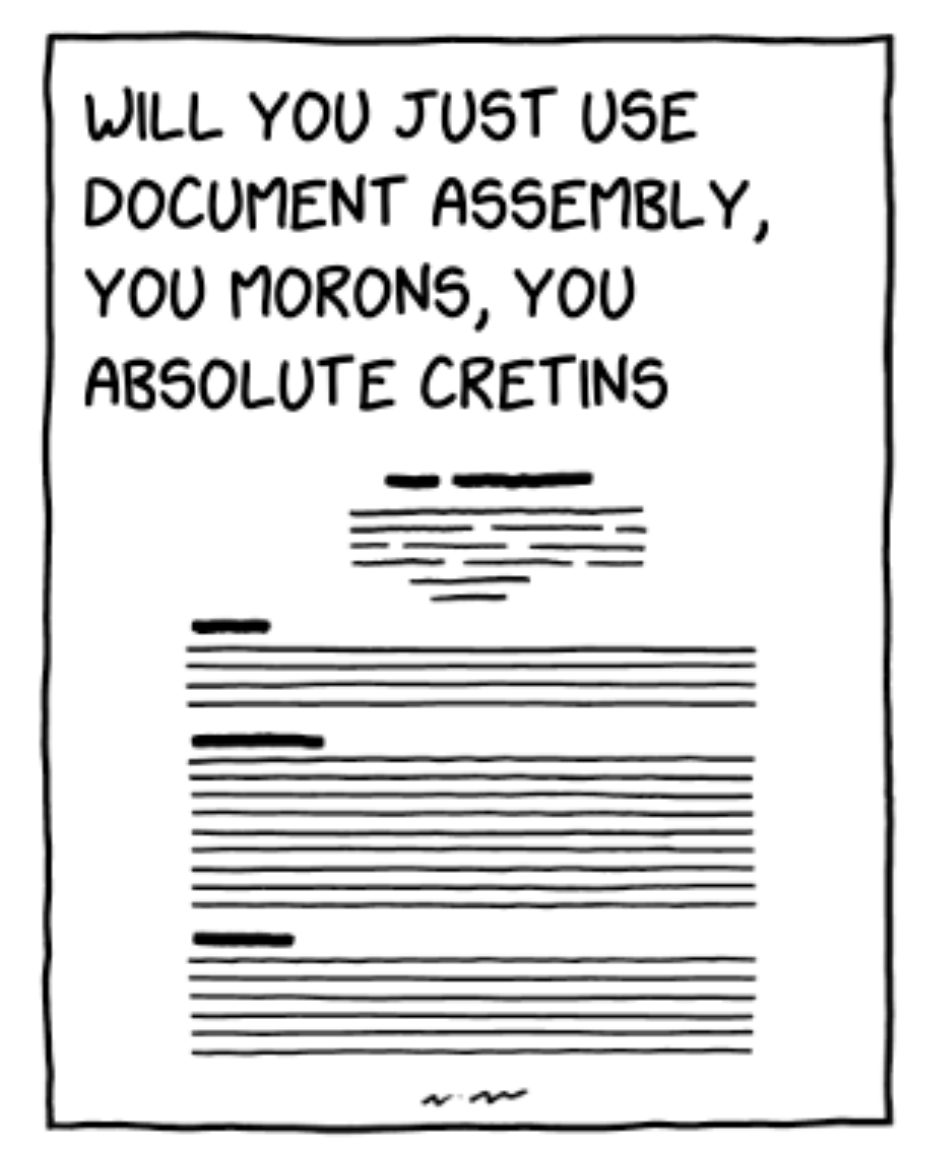 Obviously, for that one panel to work, it has to be grounded in reality.

Document assembly is a straightforward technology that allows users to change contract drafting from a copy-and-paste exercise to a process of answering an annotated online questionnaire. It holds the promise of allowing you to create contracts faster and have them be better suited to the transaction at hand, with fewer mistakes.

I haven’t had used Contract Express since Thomson Reuters acquired it, but I’m sure it’s still as good as it was then. There’s now another player on the scene, the open-source docassemble; the technologists I listen to all swear by it. And there are all sorts of other document-assembly products on the market. So whatever you need to get done, you can do it with the technology that’s available.

People Don’t Want to Grapple With What’s in Contracts

Using document assembly for contracts requires that you immerse yourself in the content. At a minimum, you have to decide what options you want to offer and what blanks you want users to fill. And whether you want to or not, you’re forced to contemplate what your contracts say and how they say it.

So whether it’s a function of aptitude or inclination, those who work with contracts would rather not delve into their contracts and would rather stick with business-as-usual.

How That Squeamishness Manifests Itself

I encountered that in my years of consulting work. Around half of my projects failed: a big company would pay me legitimate money to redo one of their templates; I would produce something that says what their template says but looks very different, as a result of my fixing the prose and rearranging the elements; my client wouldn’t be able to use it, because it was too different.

Even those who take it upon themselves to offer superior contracts to the world are unwilling or unable to truly get to grips with the task. The templates I’ve seen for sale are poor—BigLaw simulacra hawked to BigLaw. And well-meaning initiatives aimed at breaking the stasis rely on crowdsourcing—Everyone give us your dreck, and may the best dreck win!

Another manifestation of people being squeamish about delving into contracts is the urge to rely on technology—The machines will save us from ourselves! Recently I did this post about one variant of that, using artificial-intelligence technology to mark up new drafts to reflect decisions made in your stash of negotiated contracts.

Perhaps the most basic indication that people aren’t inclined to monkey with the prose of contracts is the fact that I continue to be the lone figure willing to get to grips with the subject. Evidently no one else has had the stomach for it.

So what stands in the way of broader adoption of document assembly is the fact that you have to tinker with what’s under the hood. The way around that is to free people from the task of creating the bulk of contract content. Limit their involvement to choosing what options are relevant to the task at hand and making any necessary adjustments.

There’s only one way to accomplish that: build a subscription-based, highly customized library of document-assembly templates. Enlist the help of subject-matter experts, so the content is state-of-the-art. Have all content comply with a style guide. And have the components be modular, so, for example, the governing-law provisions in all templates are consistent.

This isn’t a new idea. For one thing, I’ve been talking about it for years. So far, no one has attempted it. But it’s the only way to circumvent the copy-and-paste machine and make progress in contracts. And as a business, I think it would do well. So let’s see whether anyone has the imagination and resources to give it a try.

7 thoughts on “Document Assembly Is Easy, Contracts Are Hard”