This case involved J.P. Morgan Chase & Co.’s appeal of a lower-court ruling denying their motion to compel arbitration. The Second Circuit affirmed, holding that the lower court had correctly read the arbitration agreement to incorporate the rules of the Financial Industry Regulatory Authority (“FINRA”), which bar FINRA arbitrators from hearing claims that have been brought as putative class or collective actions.

Here’s the language at issue, from an employment agreement (emphasis added):

Any claim or controversy concerning you arising out of or in connection with the business activities of [Chase], your activities and/or your appointment as a registered representative or your employment and/or the termination thereof required to be arbitrated by the FINRA Rules shall be resolved by individual (not class or collective) arbitration in accordance with the Code of Arbitration Procedure of the FINRA … , and in accordance with applicable law.

The question was, what did the language in italics modify? In other words, we’re dealing with syntactic ambiguity, which arises principally out of the order in which words and phrases are used and how they relate to each other. Here’s what the court said:

What was Chase’s argument? This:

Chase argues that the absence of a comma before the phrase “required to be arbitrated by the FINRA Rules” compels the conclusion that it modifies only the immediately preceding words, “your employment and/or the termination thereof.”

Oh, great, I’m delighted to have this bit of bogosity rear its head again. I like to think that in this forthcoming article I definitively debunk the whole business about a comma in front of a closing modifier affecting the reach of the closing modifier. Chase cites the case that prompted my article, American International Group, Inc. v. Bank of America Corp. But thankfully, the Second Circuit ignored Chase’s argument. (The print version of my article should be available in a few weeks.) 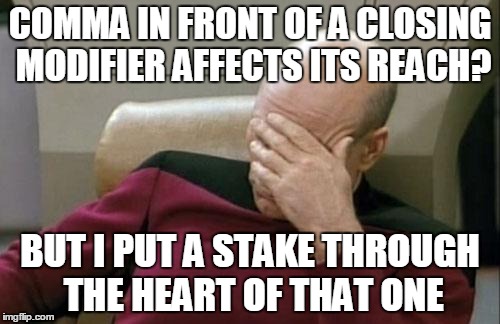 Of course, the issue for drafters isn’t who wins a fight but how you avoid having a fight in the first place. The language at issue is a mess and could do with being entirely redone, but excuse me if I don’t take up the challenge. It would involve more than massaging the language at issue, as I’d want to change the category of contract language used. That’s something I discuss in this 2010 article about the American Arbitration Association’s not-brilliant standard arbitration clause. But a quick fix might to be to move the FINRA part to the front.

I wonder who is responsible for this arbitration clause. I expect that the drafting is representative of J.P. Morgan Chase’s contracts generally—who knows how many other contract-language-driven disputes await it out there.