My “Bamboozled by a Comma” Article Is Now in Print 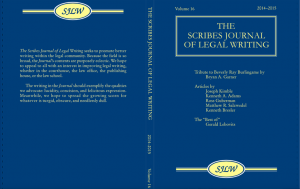 Remember my article Bamboozled by a Comma: The Second Circuit’s Misdiagnosis of Ambiguity in American International Group, Inc. v. Bank of America Corp.? Well, it’s now in print, in The Scribes Journal of Legal Writing. Go here for a PDF. The citation would be to 16 Scribes J. Legal Writing 45 (2014–15).

The article seeks to debunk a variant of the principle of interpretation known as “the rule of the last antecedent.” That variant, which I refer to as “the comma test under the rule of the last antecedent,” holds that if in a sentence a series of nouns, noun phrases, or clauses is followed by a modifier and the modifier is preceded by a comma, the modifier applies to the entire series, not just the final element in the series. I suggest that the article succeeds in demolishing the comma test as a valid principle of interpretation.

I made a “forthcoming” version of the article available in this 2013 post. It attracted some attention, including this post in the WSJ Law Blog and this item in the ABA Journal. The published version reflects some tidying-up. My thanks to Mark Cooney, the editor-in-chief, for his comments.

The article strays outside of my normal beat, in that the comma test only comes into play if drafters of a contract, or legislation, screw up and incorporate syntactic ambiguity, namely uncertainty over whether a modifier modifies this or that. My usual focus is avoiding such problems. But I’ve encountered the comma test when acting as as an expert in contract disputes, and I’ve found it highly annoying: making sense of arguably unclear contract language is difficult enough without having courts call on a misguided principle of interpretation. That’s why I’ve taken the trouble to write this article.