My Remarks on Receiving the Golden Pen Award 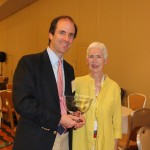 Yesterday I attended the biennial conference of the Legal Writing Institute, where I received the 2014 Golden Pen Award. My thanks to LWI members in general, and president-elect Linda Berger in particular, for their generous hospitality. (That’s Linda and me to the right.)

If you’d like to know why I received this award, go here. And below is the text of remarks I delivered after receiving the award. Soon I’ll share some thoughts prompted my conversations with Linda and others.

It’s a great pleasure to be with you today, and I’m honored that you’re bestowing on me the 2014 Golden Pen award. Some wisenheimers have expressed interest in seeing my golden pen. I’ll now have the last laugh, as I do in fact have a golden pen to show them.

In case you’re curious, I’ll tell you a little bit about how I come to be doing what I’m doing.

For a while in the 1990s, my wife Joanne and I lived in Geneva, Switzerland, where I worked at for a U.S. law firm. One fateful day in 1997, while looking out over Lake Geneva—a vista that has inspired the likes of Byron and Mary Shelly—I was inspired to even greater poetic heights. Hey, I said to myself, Why don’t I figure out how contract language works? At the time I knew essentially nothing about the subject, but I was blissfully unaware of that, so I started jotting down ideas, doing research, thinking deep thoughts, then jotting down more ideas. I found myself slowly sucked in by the topic.

My noodling continued when Joanne and I returned to the U.S. with our daughter Sydney, who had been born in Geneva. It took us a while to get settled, and we lived at Joanne’s parents for over a year. For a scarily long part of that time I didn’t have a job, so I parked myself at the in-laws’ dining-room table and grandly announced that I was writing a book. Although they would have been entitled to box me around the ears, Joanne’s parents showed great restraint.

Once back in the law-firm world, I continued working on what turned into my first book. It came out in 2001. By then, it was clear to me that I should focus on developing my contract-language expertise rather than doing deals, but it took another five years before I was able to finally stop practicing law and devote myself full-time to my grand passion for contract language. (I know that sounds kind of pathetic!)

I’ve spend the past eight years both developing my expertise and attempting to cultivate a market for that expertise. It’s been exciting but very challenging. If I’d known that it would take seventeen years for me to turn a casual interest into a viable livelihood, I probably would have found something else to do.

But this year has been something of a breakthrough year—the Golden Pen award is just one indication of that—and I’m having the time of my life. I have an entire field of study essentially to myself—analysis of the building blocks of contact language and common sources of confusion. I keep hearing it described as a “niche” subject, but I think it’s in fact vast—contracts are an essential part of business. And I get to write about many novel and subtle issues, with no end in sight. It also gets me out in the world, as I’m able to share my interest with all sorts of people in all sorts of places.

I’ve wondered how I come to find myself in this position. As a dealmaker, I was nothing special. I’m no linguist—if I weren’t able to pick the brains of pillars of the linguistics community, I’d be clueless. And the volunteers who have reviewed my manuscripts over the years will tell you that I’m no infallible prose stylist. But that combination of skills, such as they are, has allowed me to do what I do.

It probably doesn’t hurt that I’m also hard-wired for scholarship—spotting patterns in the chaos. And I’m driven to be practical, because I hate confusion, and pretension, and waste. I like the trains to run on time—but not in a fascist way, I hope! Fighting for reason and order in my tiny corner of the world offers a sense of purpose.

But enough about me! What about the fact that the Legal Writing Institute is honoring me at all?

At law schools, the default meaning of the phrase “legal writing” has been litigation writing. But transactional writing has been horning in on the action. Contract drafting is being taught at more and more law schools—in announcing my award, the board of directors of the Legal Writing Institute noted that “transactional law is increasingly important in the overall legal writing curriculum.” And a few sessions at this conference deal with contracts in some manner.

Now, I’m happy to come in from the cold, but before we get too cozy, I think it’s helpful to consider how litigation writing relates to transactional drafting.

Litigation writing is expository, it’s persuasive. It attempts to articulate something that exists outside of a document—the law, or one side to a dispute. Contracts are different. They regulate conduct—a contract creates a relationship. Because stating the rules governing a transaction calls on a narrow range of meaning, it follows that the prose of contracts is limited and stylized—it’s analogous to software code.

Given that litigation writing and contract drafting are so different, expertise in the former doesn’t qualify one to expound on the latter. In particular, litigators are prone to drawing from caselaw exactly the wrong lessons about contract language. Just because a court attributes a particular meaning to a bit of confusing contract language doesn’t mean that drafters should stick with that confusing contract language. It would make better sense for drafters to convey the intended meaning in a way that isn’t confusing. Nevertheless, those grounded in litigation writing tend to counterproductively prize what’s often referred to as “tested” contract language—confusing language that courts have had occasion to scrutinize.

What are the implications of the difference between litigation writing and contract drafting? Two come to mind. First, I don’t think you can assume that someone will be equally at home teaching both subjects. And second, organizations such as the Legal Writing Institute might have occasion to ponder whether the two subjects share enough to justify bringing them together under one big tent.

At the same time, the two fields resemble each other in a sobering way. If you advocate clearer writing, whether for litigation or for transactions, you risk being dismissed in academia. You also risk getting discouraged when you consider the effect you’re having, or rather not having, on the profession as a whole.

I won’t get into how law schools treat those who teach skills, other than to note that I’ve had full-time faculty signal that I have two strikes against me—I’m an adjunct professor and I teach a practical subject.

Furthermore, in the past year I’ve encountered a pernicious variation on that generalized disdain—that it isn’t worth devoting an entire class to contract drafting. Yes, I know that there’s a lot to fit into a law school’s curriculum, and there isn’t room for everything, but some are predisposed to consigning the practical to oblivion.

As regards change in the world at large, yes, progress is achingly slow. But I don’t get discouraged. I don’t think of myself as waging a war. Instead, I fight countless battles aimed at winning individuals over to my way of seeing things. In recent years I’ve won plenty of those battles; that offers a measure of satisfaction.

And the Golden Pen award for 2014 offers the same sort of reassurance. So thank you again.