Notes from the Road: Cambridge, England

I don’t do “Notes from the Road” posts as often as I used to. That’s inevitable—something can be novel only once, so subsequent visits to a given city lend themselves less to travelogues.

But last week saw me visit for the first time in my professional capacity a city I’ve visited often—Cambridge, England. After my public seminar at University College London on 2 November, I headed to Cambridge to speak to students in the Faculty of Law’s Masters degree in Corporate Law program.

That came about in the netizen way: in the course of writing my opus on represents and warrants, I encountered an article written by Rafal Zakrzewski, a lawyer at Clifford Chance’s Warsaw office who had helped start the MCL program. We exchanged emails, and soon after Rafal asked whether I’d like to do a presentation. 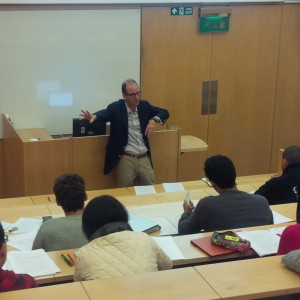 My presentation was an abbreviated version of my “Drafting Clearer Contracts” seminar. There I am, Mr. Gesticulation, in the photo to the right. I enjoyed seeing how quickly the students caught on to novel concepts, particularly during discussion of the categories of contract language. I took the liberty of laying on them the notion that anyone enthusiastic about the notion of a distinction between best endeavours and reasonable endeavours, the utility of hold harmless, or the remedies implications of represents and warrants has to be someone in severe semantics distress. That obviously includes some English judges and a lot of English lawyers. 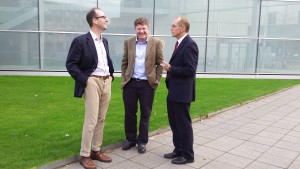 After, I had lunch with Rafal and Richard Hooley, co-director of the MCL program. I enjoyed the contracts shop talk and hearing about the MCL program. Richard and Rafal were gracious enough to indulge me in a photo op. Richard is on the right, Rafal in the middle.

I like to think that my visit to the MCL program is another small step in my insinuating myself in the English contracts world.

During my visit I also got to see my sister Christine and her husband Peter de Bolla. Christine and Pete both went to Cambridge, and except for an interlude in Geneva, they’ve been there ever since. From my teenage years onward, I’ve sporadically traipsed to Cambridge to visit them.

Christine is a conference interpreter; check out her series of blog posts on the origins of interpreting, entitled “The Search for Interpreter Zero.” And Pete is Professor of Cultural History and Aesthetics at King’s College. When I, or my wife Joanne and I, spend time with them, we know we’ll eat and drink fabulously and that we’ll likely encounter some of their many good friends. And I know I’ll have the comfort of being with someone with whom I share more history than anyone.

A bonus during this visit was that I got to see an installation that Pete and his colleague Chris Prendergast put on in King’s College Chapel several evenings last week as part of celebration of the 500th anniversary of completion of the Chapel. Entitled “Samuel Beckett in dialogue with King’s College Chapel,” it combined image, voice, music, sound, and text, plus some serious technology. I responded to it as a ploughman might respond to a chamber orchestra. Particularly eye-catching was how the photos combined with the ornate carving. The photo below to the left will give you an idea of the effect. I took the photo to the right before the event started; it will give you a meager sense of how majestic the interior of the Chapel is. 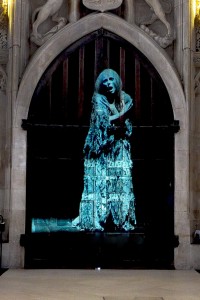 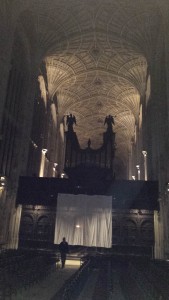