Notes from the Road: Nigeria (Virtually) 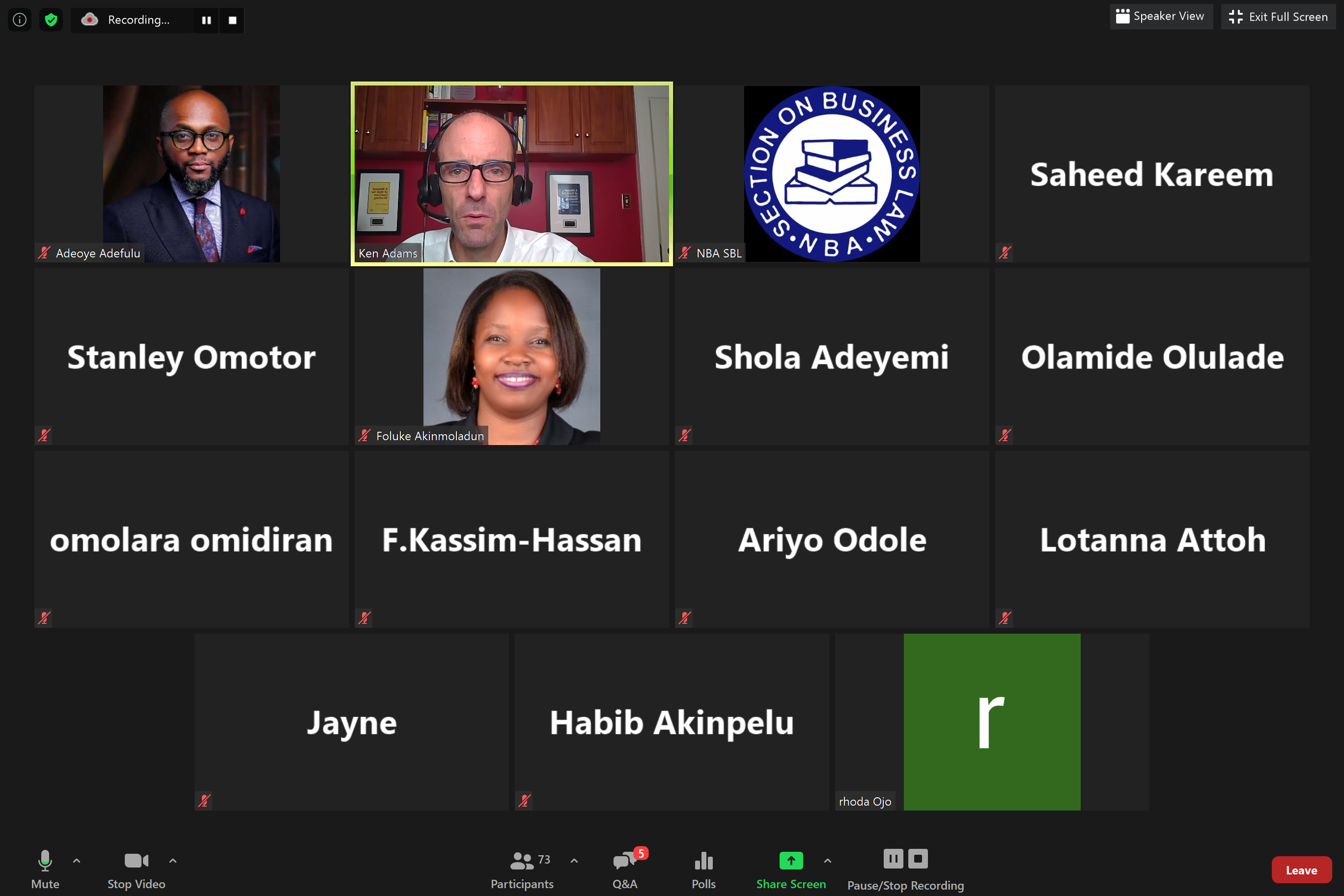 In this post from late last year, I said I didn’t think I would ever travel as much as I did in 2019. But when I wrote it, I of course didn’t expect things to fall off a cliff they way they have.

I’ve travelled only once this year, in March, for a seminar in Chicago. It had a last-helicopter-from-Saigon feel about it. Since then, all my public and in-house seminars have been cancelled or postponed, and I’ve been hunkered down in suburbia. It’s been quite a change.

Like countless others, I now use online meetings to interact with those outside of my immediate circle. Mostly those meetings have been for handling daily work, but a gratifying exception was a presentation I did a couple of weeks ago for the Nigerian Bar Association’s Section on Business Law (NBA-SBL).

Previously I’d declined to do an online version of my Drafting Clearer Contracts seminars—I thought that without the opportunity to interact face to face, the proceedings would be too dreary. With the pandemic looking as if it will stretch well into the future, at least in the United States, I had already been reconsidering, and the inquiry I received from Adeoye Adefulu (@drdeoye on Twitter) of the NBA-SBL put me over the edge—I agreed to do a presentation for them.

We did two three-hour sessions on consecutive days. Both sessions were attended by over 150 people. As expected, it took a while to figure out how to arrange interaction, particularly with such a big group, but it worked well in the second session. I like to think everyone had a good time; I certainly did. Around 75 participants and I stuck around for an additional 40 minutes after the second session, chatting about anything anyone wanted to chat about.

By email I asked Adeoye what had prompted the NBA-SBL to arrange this presentation, and how he thought it went. Here’s what he said:

The NBA-SBL is the umbrella group for business lawyers across Nigeria. Over the last few years, we have focused on building a bridge between the legal community and the wider business world, as well as expanding the competence of business lawyers. Your presentation presented an opportunity to do both. For one thing, clients regularly complain that it’s a chore to figure out from the average business contract what the deal is!

It came as no surprise that you were able to give the participants a good sense of what’s in A Manual of Style for Contract Drafting, and why clear and modern guidelines for contract language are so important. But something the participants might not have expected was your advice regarding what they can achieve.

In Nigeria and many other countries, the Anglo-American style predominates for international contracts, and we tend to follow the lead of the big English and American law firms and companies. You told participants that because traditional contract drafting is so dysfunctional, we shouldn’t be shy in challenging what we find in contracts, whatever the source. You also said that with enthusiasm and application (and needless to say, a copy of your book), Nigerian lawyers would be able to negotiate confidently with their counterparts at any organization. I’m sure that got many participants thinking!

My thanks to Adeoye for inviting me to give this presentation and for helping ensure that it went smoothly.

2 thoughts on “Notes from the Road: Nigeria (Virtually)”