Notes from the Road: Seoul

I’m now in Singapore, gearing up for tomorrow’s seminar. For those who might find it of interest, here’s how my time in Seoul went.

Having arrived the night before, I spent most of the day hanging out in the Renaissance Seoul hotel and its immediate environs (Gangnam). As usual, I wasn’t interested in being a tourist—unless an activity involves engaging with people, I’m inclined not to bother, beyond scouting out interesting places to eat.

But after rousing myself from a jetlag-induced coma, I headed out into the early evening. Without mishap, I made my way to the Yeoksam subway station, caught the green line, then changed to the orange line, taking the opportunity to observe that, of course, Korean infrastructure makes much U.S. infrastructure appear decrepit. I didn’t see any other foreigners; I appreciated how one gentleman made sure that I knew where I was going. I disembarked at Anguk, in the central part of town. There I met Nancy Kang.

I’ve corresponded with Nancy sporadically over the past year, and she’s been very helpful, so I was delighted to have the opportunity to meet her in person. Nancy is of Korean origin, and her parents live in South Korea, but she was educated in the U.S., including at New York University School of Law. Straight after law school she came to Seoul, and she’s now working as in-house lawyer at a company in a Korean industrial group. 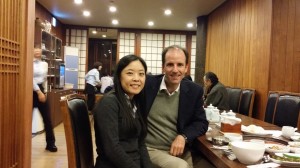 We ambled to a nearby restaurant, where Nancy ordered bulgogi and the trimmings. I was happy to have Nancy act as chaperone—my Korean is, of course, nonexistent. (I’ve toyed with, but haven’t dared use, the impressive S Translator app on my phone.) The server took the picture of Nancy that you see to the right; unfortunately, she’s in the company of some haggard, leering guy.

We talked about what we’re each doing. I could relate to the restlessness that had brought Nancy to Korea, having myself left England for law school in the U.S., then left the U.S. for three years in Switzerland.

After we said our goodbyes, I made my way back to the hotel and prepared for the seminar the next day.

My public “Drafting Clearer Contracts” seminars are always the same, and always different. The same, in that the PowerPoint presentation varies only slightly from venue to venue, as does my patter. Different, in that each audience responds differently, leading the discussion in different directions.

In the case of my Seoul seminar, I figured out during the course of the morning that many of those present—they came from the big industrial groups and a couple of law firms—had attended U.S. law schools. That didn’t affect what we discussed, but it did mean that I stopped making the sorts of adjustments that I make for groups composed largely of non-native English speakers.

It became clear that those present wrestle with the same concerns as any group attending one of my U.S. seminars. In a way, that’s too bad. In the past sixty years, South Korea has performed a dramatic act of reinvention and has taken some vital industries by storm. I would have loved to see South Korean companies grab the contracts process by the scruff of the neck and demand of it the same ruthless efficiency as any other process. Instead, it seems that in Korea, too, the contracts process lags behind business, something I bemoaned in this post.

The one big surprise came at lunch. We headed to the top floor of the hotel, where a function room was set aside for our use. It’s always nice to be able to have lunch away from the seminar room—a classroom setup isn’t conducive to conversation. But I hadn’t expected a five-course, waiter-service lunch! It was certainly agreeable, but I wasn’t able to migrate between tables as I usually do. And it was sufficiently leisurely that after an hour I had to abandon my dessert and quickly usher people back down to the seminar room. Once there, I felt that it took a while to get momentum going again. So this seminar wins the prize for opulence, but I suspect that in the future I’ll make sure that we stick to buffet service. Such are the mundane considerations of the seminars business.

Given that I’m a stranger to Korea, I couldn’t claim to know exactly what the attendees made of the seminar. And it’s in my nature to focus on what I could have done better. (Why didn’t I get rid of that freaking microphone earlier!) But everyone was very engaging, and they gave every appearance of having found it worthwhile. I was tickled by the account of two women, who explained that their boss was forever plying them with my blog posts and articles—they described him as an unabashed fan. So they left the seminar with my only extra copy of the book, suitably inscribed to their boss.

Thursday, 14 November (After the Seminar)

Among those present at the seminar was none other than Jungwoo Chang, who recently had been kind enough to do a Q&A with me (here). He had come with one of his colleagues at LG International, Sean Yoo. Sean grew up in different countries around the world and went to college and law school in the U.S.

I had expressed an interest in having a drink with Jungwoo, so after the seminar he, Sean, and I headed off for an evening that consisted of three restaurants, four taxi rides, and one shopping expedition.

I had mentioned that after the rigors of the seminar, I could be convinced to have a beer, so our first stop was Vatos Urban Tacos. That might sound like a preposterous option, but the microbrew beer was great, and the Korean twist on Tex-Mex was amusing as well as tasty. While we chomped on tacos and something that appeared to be the result of a genetic experiment involving French fries, kimchi, and nachos, conversation began with what we had in common (the legal profession) and then went off on looping tangents. 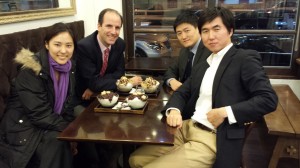 Next up was Korean barbecue, including the samgyeopsal gui that Jungwoo had invoked in our Q&A, all washed down with soju and beer. We were joined by Jungwoo’s friend, Jacqueline Sohn. She too had lived and gone to law school in the U.S., and she now works at LG Chem. Then we headed for the restaurant Dongbinggo, Jungwoo’s preferred source of patbingsu, the Korean shaved-ice dessert. That’s where the photo at the right was taken. (Unfortunately, that haggard and leering guy is horning in on the action again.)

To round out the evening, Jungwoo and Jackie escorted me to the shopping district Myeong-dong, to look for a gift for my daughter. I found something, but unfortunately we didn’t have time to search among the stores hawking the obvious global brands to find that ideal gift, something that combined the Korean, the now, and the kitsch in proportions suited to a seventeen-year-old.

In any event, the evening’s hospitality could only be described as epic. I was aware that Koreans know how to have a night out on the town, but I hadn’t expected to be a beneficiary, and with such convivial companions. My thanks go to Jungwoo for arranging it. I hope to have the opportunity to reciprocate at some point, but it would require some thought to come up with an evening’s entertainment that meets the very high standard that he, Sean, and Jackie set.

Given the rigors of the previous day, I woke up late and spent the day hunkered down in the hotel, stepping out only to sample Korean fried chicken. I left for the airport early the next morning.

My time in Seoul was fleeting but memorable. I expect to be back next year. I’d like to get to know Korea better, and I hope to reconnect with those who helped make this visit so enjoyable.

2 thoughts on “Notes from the Road: Seoul”