There’s More Than One Way to Sell a Company

In  Buckingham v. Buckingham, 14335 314297/11, NYLJ at *1 (App. Div., 1st, Decided March 19, 2015), a well-known matrimonial lawyer botched the drafting of a prenuptial agreement. As drafted, the relevant provision stated that if the husband sold “MS or any of its subsidiaries or related companies,” he was obligated to pay the wife a share of the proceeds. But the provision did not address the consequences of the husband’s sale of any shares he owned in those businesses. Stated differently, the agreement gave the wife the right to proceeds from asset sales, but was silent about the right to proceeds from stock sales.

The couple married; time passed; and the marriage failed. Along the way, the husband sold shares of his business and the ex-wife wanted her share of the proceeds: about $950,000. The husband and the courts said “no.” The court reasoned that the relevant language created a condition to the husband’s obligation to pay sale proceeds to his ex-wife, but that language encompassed only asset sales.

But since we’re in the marketplace of ideas, allow me to offer a slightly different analysis:

Whenever you’re dealing with disposition of a company, you have to bear in mind that there are three ways of accomplishing that:

The provision at issue in this dispute arguably encompasses not just asset sales, as Tina suggests, but instead all three of those alternatives. In fact, the court never mentions asset sales.

It’s relevant that although Tina suggests that the relevant provision is in the active voice, with the husband as the subject, that’s not the case. Instead, it’s in the passive voice, with no by-agent:  “… if MS or any of its subsidiaries or related companies are sold ….” That would encompass sale of all the shares of MS, and it could be interpreted as referring, in a colloquial way, to any form of disposition, including an asset sale or merger.

The husband owned a majority (55.83%) of MS shares rather than all the shares. It follows that if the provision had been phrased in the active voice, with the husband as the subject, it couldn’t be interpreted as referring to sale of MS by sale of all MS shares, including those not owned by the husband. It would also be harder to argue that it applies to an asset sale or merger.

But those nuances don’t affect that the wife’s lawyer messed up by not having the provision cover individual sales by the husband.

And on a related note, since I’m such a swell guy, here’s my definition of “Change of Control,” which encompasses the three forms of divestiture (it’s marked to show changes prompted by Vance’s comment): 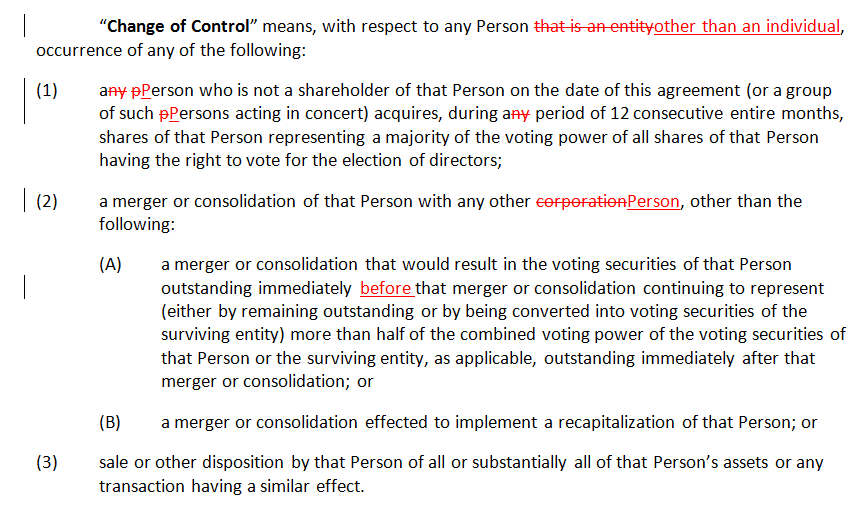 Why not “Change in Control”? Funny you should ask; see this 2008 post. And more generally, I suspect that you could improve this definition. I invite you to give it your best shot.