For a couple of years I used my Wacom Graphire Wireless tablet to annotate PowerPoint slides during my seminars. (I wrote about it in this 2009 post on the AdamsDrafting blog.) It doesn’t have a screen—instead, it has a flat surface on which I wrote with a pen-like stylus, with my scribbles appearing on the projected image of my laptop screen. It was intended for graphic artists, meaning that I used only a small fraction of its functionality. But that small fraction was important, in that it allowed me to to make my annotations while engaging with participants.

But then Wacom discontinued the tablet. And my tablet started acting up. Ultimately, I had to do the equivalent of applying a defibrillator to get it going, and even then it worked only half the time. So I needed a replacement.

I contemplated getting another Wacom wireless tablet, the Intuos4 Wireless. It’s a nifty device, my old tablet on steroids. But I decided that given all its graphic-arts bells and whistles (and a price tag of around $370), I’d feel like a chump using it just for my PowerPoint presentations—like using a Lamborghini for a home-to-train-station commute. 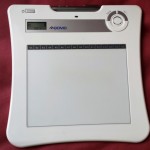 So I roamed around on Google looking for an alternative … and the only one I found was the Qomo QIT30. (Who Qomo?, I hear you ask. It’s a Michigan-based company that offers a line of presentation-technology products.) So I purchased a QIT30 from B&H for $191.95 plus tax and shipping. Contact your local Qomo representative (see this map) to determine who distributes the QIT30 in your area.

I gave the QIT30 its first workout at my Boston “Drafting Clearer Contracts” seminar last week, and I’m very pleased with it. Some thoughts: