Where in a Sentence Should You Place a Conditional Clause? (Plus Observations on the Nature of Contract Language)

[Updated 1 January 2018: Revised to reflect that the photo included in Bryan Garner’s tweet features not exceptions (as I originally stated) but conditional clauses.]

I noticed an exchange between D.C. Toedt and Bryan Garner. Because it allows me to address a moderately interesting issue, namely where in a sentence you should put a conditional clause, I permit myself to wade in.

The starting point is this article by Garner in the ABA Journal. Here’s the gist of it:

This advice is entirely standard and unobjectionable, but it has no bearing on contracts. Bryan’s audience is lawyers who are “professional rhetoricians.” That doesn’t include contract drafters: contracts aren’t the place for telling stories or persuading.

Nevertheless, in this post on his blog, D.C. uses Bryan’s article to make this point about contract drafting:

In a contract, it’s less important for the writing to pack a punch than it is for each sentence to make its point quick­ly, precisely, and under­stan­d­ably, so as to help speed up legal review and get the contract to signature soon­er. And that will usually call for the kind of boring, just-the-facts-ma’am style — Alice will do X, Bob may do Y — that Garner urges writers to avoid.

But in applying to contract drafting Garner’s points regarding rhetorical style, D.C. is comparing apples and oranges: it makes no sense. But D.C. avoids facing that because he includes no examples.

Bryan responded with this tweet. In addition to pointing out that D.C. had offered no examples, he says this:

The principle of end weight—putting emphatic words at the ends of sentences to avoid syntactic fizzle—applies almost as strongly to contractual drafting as in other expository prose.

So now Bryan too is comparing apples and oranges. This general proposition leaves me flummoxed. 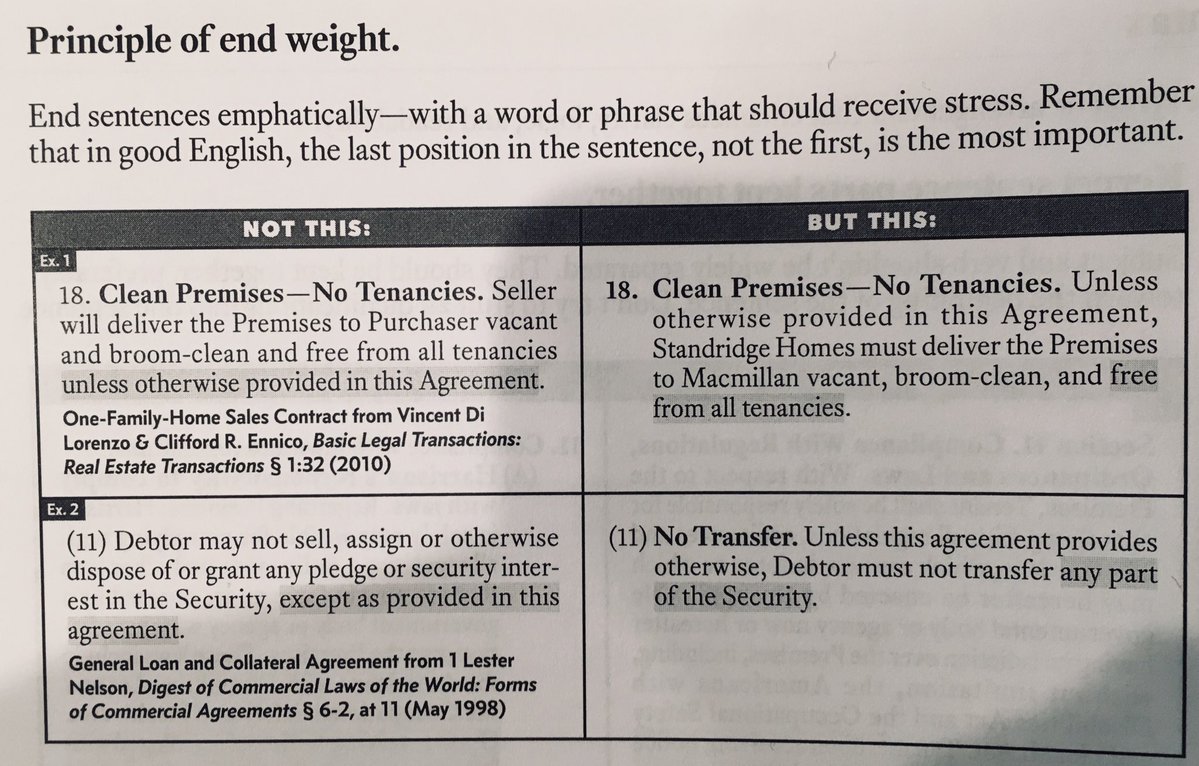 Here’s what MSCD 3.326 says about where to put the conditional clause:

What explains the tendency to put the conditional clause first, in contracts as well as other kinds of writing? It has nothing to do with emphasis. After all, whether a matrix clause comes after or before a conditional clause is a function not of how “emphatic” it is—whatever that means—but instead is a function of which requires more effort to read. Perhaps putting the simpler component first reduces the risk that it gets lost. I’m not going to speculate on this now, as it’s not specific to contract drafting. If you have any ideas, you’re welcome to chime in.

So where do we end up? Bryan’s ABA Journal article doesn’t apply to contract drafting. By contrast, the examples in the photo in his tweet relate to all kinds of writing, including contract drafting. But Bryan doesn’t identify the narrow issue involved, so it might seem that he’s making a more general point; that’s not the case. And he seems to misidentify what’s at stake. I hope this post makes things clearer.

8 thoughts on “Where in a Sentence Should You Place a Conditional Clause? (Plus Observations on the Nature of Contract Language)”