Yet Another Dual Verb Structure: “Has Granted and Hereby Grants” (Featuring Lord Byron)

Friends, you’re in for a treat.

In this post a couple of days ago, I considered the dual verb structure shall grant and hereby grants, with my IP sensei Ned Barlas guest starring. The next day Ned slipped me the image below, courtesy of Gary Dyer, professor of English at Cleveland State University: 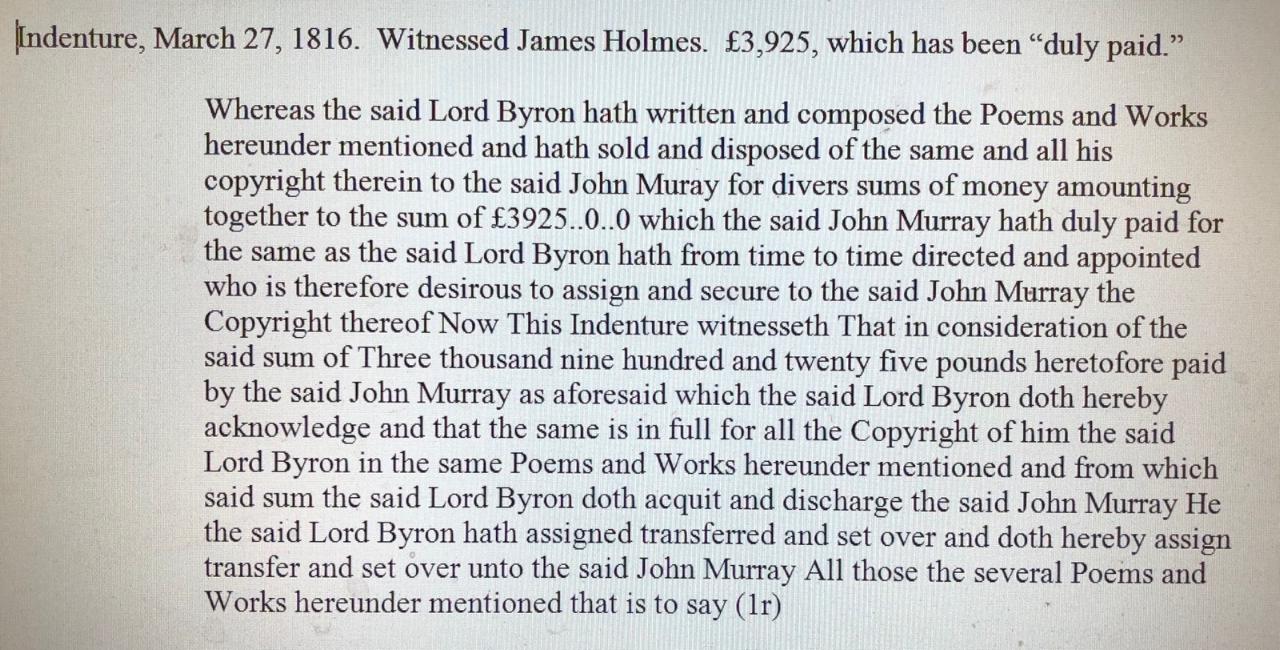 It’s a screenshot of the text of the 1816 indenture between the badass English poet Lord Byron and his publisher, John Murray. (Note that it exhibits that strange bygone drafting fad, omitting all punctuation.) What we care about is the dual verb structure hath assigned transferred and set over and doth hereby assign and transfer and set over.

This indenture was prepared by the well-known solicitor Sharon Turner, who numbered several of the most important London publishers among his clients. The context is that Lord Byron was about to leave for Europe, possibly never to return, and Murray needed to make sure that his title to the various Byron works whose copyrights he had paid for (at various point over the period 1812-1816) was made official. The works involved included such big-selling works as Childe Harold’s Pilgrimage Cantos I-II, The Giaour, and The Corsair.

Gary also said, “Sharon Turner tended to craft documents in such as way as to cover every possibility, so there will be some excess verbiage.” A risk-averse, wordy lawyer? I’m shocked—shocked! (For more background, see Gary’s article Publishers and Lawyers, The Wordsworth Circle 121–26 (2013) (here).)

As with shall grant and hereby grants, the Byron example could be belt-and-suspenders: if for some reason it’s decided that the transfer to John Murray hadn’t already taken place, the transfer effected by the indenture would be the fallback. I see two problems with that. First, if that’s what had been intended, it would have been clearer to say so in separate sentences. And second, traditional contract drafting contains all sorts of nonsense verb structures, so one could explain this dual verb structure as simply more of the same.

Why discuss the Byron example at all? Because it’s alive and well on EDGAR, featuring a variety of verbs:

… the Company has granted, bargained, sold, conveyed, assigned, transferred, mortgaged, pledged, set over and confirmed and hereby grants, bargains, sells, conveys, assigns, transfers, mortgages, pledges, sets over and confirms to the Trustee, and has granted and hereby grants to the Trustee, for itself and for the benefit of the Holders, with power of sale, a lien upon and a security interest in, the following (subject, however, to the terms and conditions set forth in the Mortgage Indenture and herein):

For good and valuable consideration, the receipt and sufficiency of which are hereby acknowledged, Ocular Therapeutix, Inc. (hereinafter referred to as “ASSIGNOR”) has sold, assigned, and transferred, and by these presents hereby sells, assigns, and transfers, unto …

4 thoughts on “Yet Another Dual Verb Structure: “Has Granted and Hereby Grants” (Featuring Lord Byron)”