Courtesy of the High Court of England and Wales, A Reminder that Ambiguity Is Best Left to Experts

Thanks to a reader, I learned of the opinion of the Chancery Division of the High Court of Justice of England and Wales in Dooba Developments Ltd v McLagan Investments Ltd [2016] EWHC 2944 (Ch) (here).

Dooba Developments Ltd and McLagan Investments Ltd (referred to as “Asda” in the proceedings) entered into a contract for purchase of land that was to be the site of an Asda Superstore. The contract was subject to satisfaction of four conditions relating to planning permission and consent to undertake highway works in connection with development of the site.

Asda rescinded the contract on the grounds that Dooba had failed to satisfy the four conditions by the stipulated date (the “Longstop Date”). Dooba sought a declaration that Asda’s notice of rescission was invalid and that the agreement had become unconditional. Asda then applied for summary judgment on the grounds (1) that there was no real prospect of Dooba succeeding in establishing that one of the conditions—the one relating to highway construction—had been satisfied by the Longstop Date and (2) that for rescission, it was sufficient that one or more of the conditions remained unsatisfied at the Longstop Date.

Without prejudice to the provisions of paragraph 3 if all of the Conditions have not been discharged in accordance with this Schedule by the Longstop Date, then either Asda or Dooba may rescind this Agreement by giving to the other not less than ten working days written notice to that effect.

The initial hearings were before one of six “masters” of the Chancery Division. Asda prevailed on both points. Dooba appealed against the master’s decision on the second issue. David Halpern QC, sitting as a deputy High Court judge, accepted Dooba’s argument that the right arose only if all four conditions had not been satisfied by the Longstop Date.

The case now goes to trial over Asda’s arguments regarding the other three conditions. Based on the deputy judge’s decision, if any of the three remaining conditions had been satisfied by the Longstop Date, Asda would not be entitled to rescind the contract.

I’ll spare you the master’s blather regarding all, as quoted in the deputy judge’s opinion. (Maybe it’s an English thing, but when a judge uses “It seems to me” and “To my mind” in reaching a conclusion, it’s not a good sign.)

Here’s what the deputy judge had to say:

22. Mr Timothy Dutton QC, who appears for Asda, accepts that Dooba’s construction is correct as a matter of strict logic but describes the approach which I have set out as being “pedantic”. That epithet is doubtless regarded as derogatory in many circles, but perhaps not in the case of lawyers seeking to construe a formal agreement.

23. The correct meaning of a word or clause in English is, of course, governed by ordinary English usage rather than by strict rules of grammar or etymology. There are undoubtedly words whose normal meaning is not their etymologically correct meaning. One example is decimate, which in ordinary usage is now more likely to refer to the deaths of 90% than to the deaths of 10% of the population or group in question. Another example, suggested by Dooba, is the meaning of hopefully. A person who says that he will hopefully go to Birmingham is describing his expectation that he will be able to travel there, not his state of mind when undertaking the journey. In contrast to these examples, I agree with Asda that the formula “if all … have not …” is sometimes used to mean “if not all … have”, but I do not accept that this has become its primary meaning.

The deputy judge’s reasoning is an improvement on the master’s, in that the deputy judge at least understood that the issue was the scope of the negation. But “strict Boolean logic” is a deeply unpromising way to approach the English language. And his irrelevant paragraph 23 shows him to be out of his depth.

Instead of assuming that it was incumbent on him to rely on his own instincts in interpreting the language at issue, the deputy judge should have considered that perhaps an entire field of study is devoted to analyzing this sort of confusion.

, flip to the lexical index, and look for the entry for all. The fifth reference had what I was looking for. Here’s the relevant extract of chapter 5, §5.1: 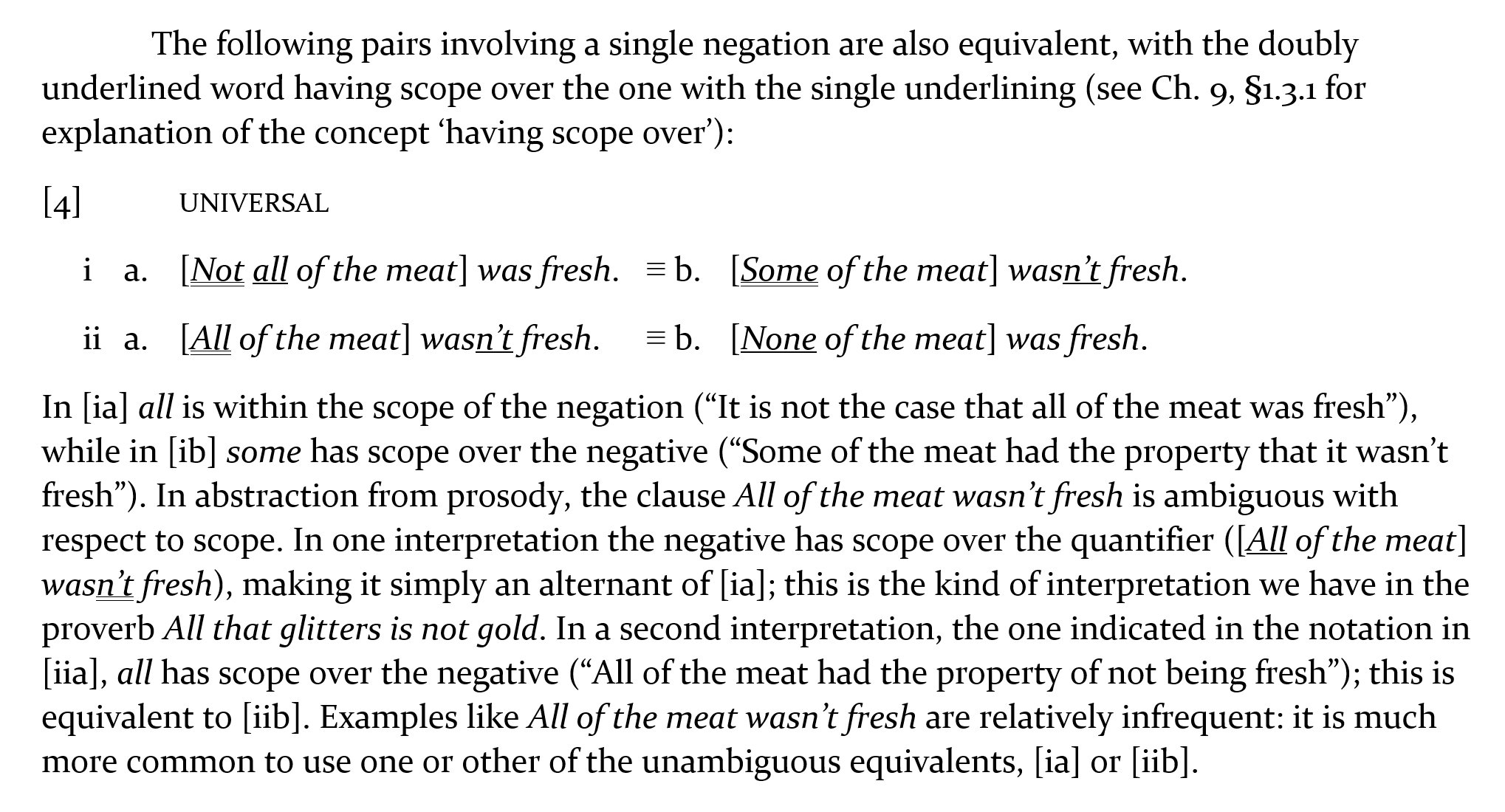 In saying that All of the meat wasn’t fresh is ambiguous “in abstraction from prosody,” CGEL means that it’s ambiguous if you ignore stress and intonation. In other words, it’s ambiguous as written: in speech the ambiguity would likely be resolved by the prosodic properties of the utterance. Specifically, contrastive stress on All would signal that some of the meat was fresh and so would serve to convey the meaning [4ia]. (I had the benefit of checking this with Rodney Huddleston, co-author of CGEL and, more specifically, chapter 5.)

Because all of the Conditions have not been discharged is directly analogous to All of the meat wasn’t fresh, CGEL‘s analysis applies to this dispute. In other words, instead of the meaning of the language at issue being clear as a matter of Boolean logic, linguistics shows us that it was in fact ambiguous.

But the deputy judge didn’t have the benefit of GCEL, because all he knew to do was to rely on his own instincts.

I’m not in the business of resolving ambiguity, so I won’t attempt to suggest which meaning should have prevailed, had the court recognized the ambiguity.

My focus is how to avoid ambiguity. CGEL has valuable advice to offer here too. As it notes, the structure on display in the language at issue in this dispute isn’t common; the ambiguous equivalents are much more common. Drafters should use only the ambiguous equivalents. If you mean some (or not all), that’s what you should say. If you mean none, that’s what you should say.

It’s not only in England that a blinkered approach to ambiguity causes court opinions to go off the rails. For two US examples, see this article and this article.

In the United States, whether contract language is ambiguous is a question of law, so courts generally don’t admit expert testimony on ambiguity unless technical terms are involved. (See this 2009 blog post.) English courts have the same approach.

But that approach makes no sense. Analyzing contract language for ambiguity can be a complex business. Being a judge doesn’t equip one to analyze ambiguity, just as being a careful driver doesn’t equip one to service a car engine. As I noted in this post—it so happens that it’s about my recent visit with Rodney Huddleston—I stay out of trouble by considering as “linguistics” any contract-language confusion that relates to how the English language works. If instead you consider it simply to be a matter of law, that would make it more likely that your attempt to explicate a given instance of confusion ends up in the ditch. If courts continue to overestimate their understanding of ambiguity, we’ll continue to have misguided decisions such as that in Dooba Developments.

Admitting expert testimony on ambiguity would give litigants a better chance of guiding judges to a sensible analysis. It would also remind judges to be aware of the limits to their expertise.

In their 2002 article The Linguist on the Witness Stand: Forensic Linguistics in American Courts (here), Peter Tiersma and Lawrence M. Solan suggest how linguists might conduct themselves when acting as expert witnesses on the meaning of contracts and statutes:

In cases involving complex language about which there is understandable disagreement between the parties, linguists can serve a role by acting as tour guides, walking the judge or jury through the disputed language, and explaining how the disputed language is an example of well-studied linguistic phenomena. The linguist’s ultimate interpretation is not very important, and sometimes should not be given at all. Judges and jurors can use their own intuitions as native speakers. But if the linguist can help the players in the legal system understand in a systematic way the source of these intuitions, she can help jurors to structure their deliberations, and judges to structure their opinions.

But even if a court won’t admit expert testimony on ambiguity, litigants could enlist a linguist or, preferably, a commentator on contract language who is attuned to linguistics (yes, I know, I’m one of those), to help them behind the scenes. That could go a long way toward putting a sensible analysis before a judge. (That’s something I discuss in this article.)

I wonder if Eversheds, representing Asda, presented to the court in Dooba Developments something resembling the analysis in this post.