The Dark Heart of Contract Management 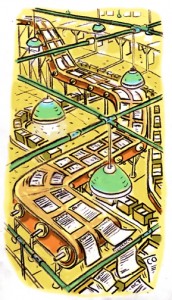 Check out this post by @ronfriedmann. It’s entitled “The Future of Contract Management.”

As Ron notes, the most ambitious software, know as contract lifecycle management (CLM) software, aims to offer “end to end contract management, from drafting and negotiating, to signing and execution, to managing rights and obligations.” There’s also software that aims to tackle one or more aspects of the process.

The gist of Ron’s article is that this field is crowded with both kinds of vendors, yet penetration and usage are low.

Ron offers a possible explanation: “CLM is hard because managing a contract over the lifecycle touches so many hands and departments in a company.” He suggests that organizations might be better off adopting software that addresses a specific need.

I acknowledge that CLM is indeed hard. I’ve observed from the sidelines, aghast, as companies have ploughed money into counterintuitive, laborious technology controlled by a rotating roster of remote technicians. I haven’t made a study of CLM software, but I have yet to encounter anyone who enjoys using it.

File this under “if all you have is a hammer, everything looks like a nail” if you wish, but I have my own ideas as to why contract-management software has had a hard time gaining traction. It relates to the dark secret of contracts at big organizations: Thanks to years of heedless copy-and-pasting combined with a lack of guidelines and training—in other words, passive drafting (described here)—an organization’s contracts are likely to be a hot mess. I routinely observe the usual problems of traditional contract drafting on flagrant display: bloated, confusing, unwieldy text that masks incomprehension of basic deal points.

Doing anything about this can be a challenge: you have to stop the machinery, dismantle it, then retool it and rebuild it. If you’re not the one who built it in the first place, but instead are just the pilot holding on for dear life as it barrels down the tracks, suddenly being asked to become the engineer can be intimidating. Add inertia to the mix, and the result is stasis.

The notion of applying software to this is deeply unpromising. Software can’t create order out of something that doesn’t make sense.

That’s one reason why I help companies do the necessary rebuilding. If your contracts are shorter, clearer, and say what they need to say and nothing more, your automation initiatives stand a better chance of working.

(By the way, the illustration is by Russell Christian. It was one of several I commissioned in my role as grand patron of contract-drafting art. Go here for other examples.)